Risking it With Scott 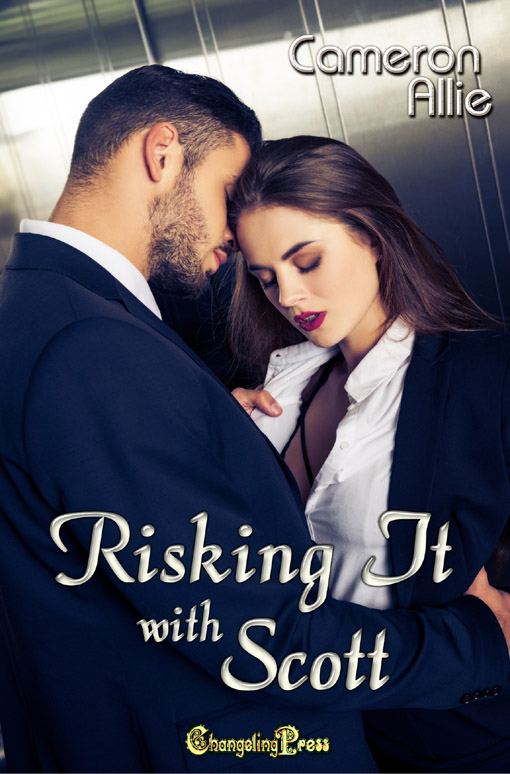 Love Me or Leave Me Book Three

The most challenging part of Scott’s new job as a sales rep for Winters Beer is attempting to get the local bar, the Fiddler, to sell their brew. Why? The bartender, Mercedes. She’s gorgeous, sexy, and smart, and she turns him down every time he approaches her. After coming to her rescue, she rewards him with a kiss — and her number. But when it comes to love, Scott has a dirty past, and he’s not quite ready to risk his heart again. He hopes one carnal night will be enough to satisfy his need for the elusive barkeep.

Mercedes knows she shouldn’t trust Scott. Not after hearing the rumors at the bar, rumors from women saying he doesn’t call after their night together, or worse, he never calls at all in the first place. After one wild night in his bed, he delivers a crushing blow — he’s not interested in a relationship. But she’s welcome in his bed, anytime.

Will pride keep her from enjoying the pleasure she finds in his arms? Can Scott overlook past pain and risk his heart all over again?

He’d been hoping to see Mercedes, but as the owner of the Fiddler droned on and on about building miniature tanks from World War One, his new hobby, it became clear that Scott was going to be disappointed.

As the newest sales rep at Winters Beer, Scott had been tasked with trying to build their brand in northwestern Ontario. He traveled to various restaurants, bars, and hotels in an attempt to get them to expand their product line to include Winters Beer.

For months he’d been trying to get Winters into the Fiddler. It was a popular watering hole, one his friends often frequented. The owner, Jim Sanders, was dragging his feet when it came to adding to the menu. Scott had a feeling Jim was looking to sell the bar. His interest seemed torn between too many things. Midlife crisis, Scott thought, as he looked over the man who had recently dyed his hair and was in the midst of growing a poorly shaped goatee.

It didn’t really bother Scott, though. He didn’t mind Jim’s hesitation. It gave him more opportunities to run into Mercedes.

As far as he was concerned, Mercedes was a goddess.

She was a bartender there. She had straight black hair, so straight that not a strand was ever out of place. Occasionally she’d braid a little strip down the front, and it would sway to and fro as she rushed to fill drink orders. She worked at both the Fiddler and at Club Ivy, a nearby night club. He noticed when she worked at the bar her makeup was always more conservative, yet still she wore bright lipstick, while at the club she usually wore a thick line of black eyeliner, curving out from the corner of her eye. It was generally enhanced by a bright color, a bold green or daring purple. Despite her workplace, she always had polished nails with little embellishments on the thumbnails.

Scott fought not to get a boner as he stood talking with Jim. He glanced toward the empty bar. The Fiddler wouldn’t be open for another hour, but sometimes Mercedes came in early. It was the best time to talk to her.

For months now he’d been chasing her. He’d flirt. She’d flirt. He’d ask her out. She’d say no.

His best friend Heath kept telling him it was part of her job to flirt. She did it for tips, but Scott knew it was more than that. He knew there was something special between them. And he knew she felt it too.

He just couldn’t figure out why she kept turning him down.

Unhappy with how his business had concluded, Scott headed for the exit. Jim was still being reluctant, and Scott wondered if something more was happening than just stubbornness. Jim had said he’d meet with Allan again, but the whole thing pissed Scott off. It wasn’t the first time they’d set up a meeting, then Jim had blown Allan off and didn’t show up. Besides, it was Scott’s job to land the sale, not Allan’s. Allan was the owner of the company, and more recently, an engaged man. He should be spending his time showering his fiancée, Candice, with love and affection.

As he approached the double doors of the bar, he heard a frustrated voice through the wood, followed by repeated banging and thumping noises.

Scott opened the door that wasn’t vibrating on its hinges and saw Mercedes standing on the other side trying in vain to pull her key out.

“Hey. Having some trouble?”

She glanced at him before straightening her braid. “No, I just thought I’d fight with the lock for no reason.” She returned her attention to the key and gave it another pull.

“Sorry,” she apologized for her outburst. “What are you doing here?”

“Yeah, he’s like that. And cheap, too! Like this lock. It would take nothing to fix it. Hell, I offered to change it myself, but he won’t shell out the money for a new one. Stingy bastard.”

Worried Jim might overhear their conversation, Scott shut the door. He’d gone back to his office, but Scott didn’t want to chance her losing her job over a conversation. “Want me to get it out?” he offered.

Mercedes smiled at him. “It’s okay.” She tried again, failed, and slapped her palm against the wood surface. This time she refrained from swearing, though Scott assumed she’d only done so because he was standing there.

“No. I’ll get it.” Twenty seconds later, after jiggling and pulling the key, she slumped. With her forehead against the door she finally gave in. “It’s cold out here. I give.”

For December it was unseasonably warm, but he understood. “My fee just went up.”

“My fee for helping. It went up. See, the first time you refused my help I understood. You wanted to do it yourself. The second time you were being stubborn, and I’ve had my fill of stubborn today. I’ll help you, but it will cost you.”