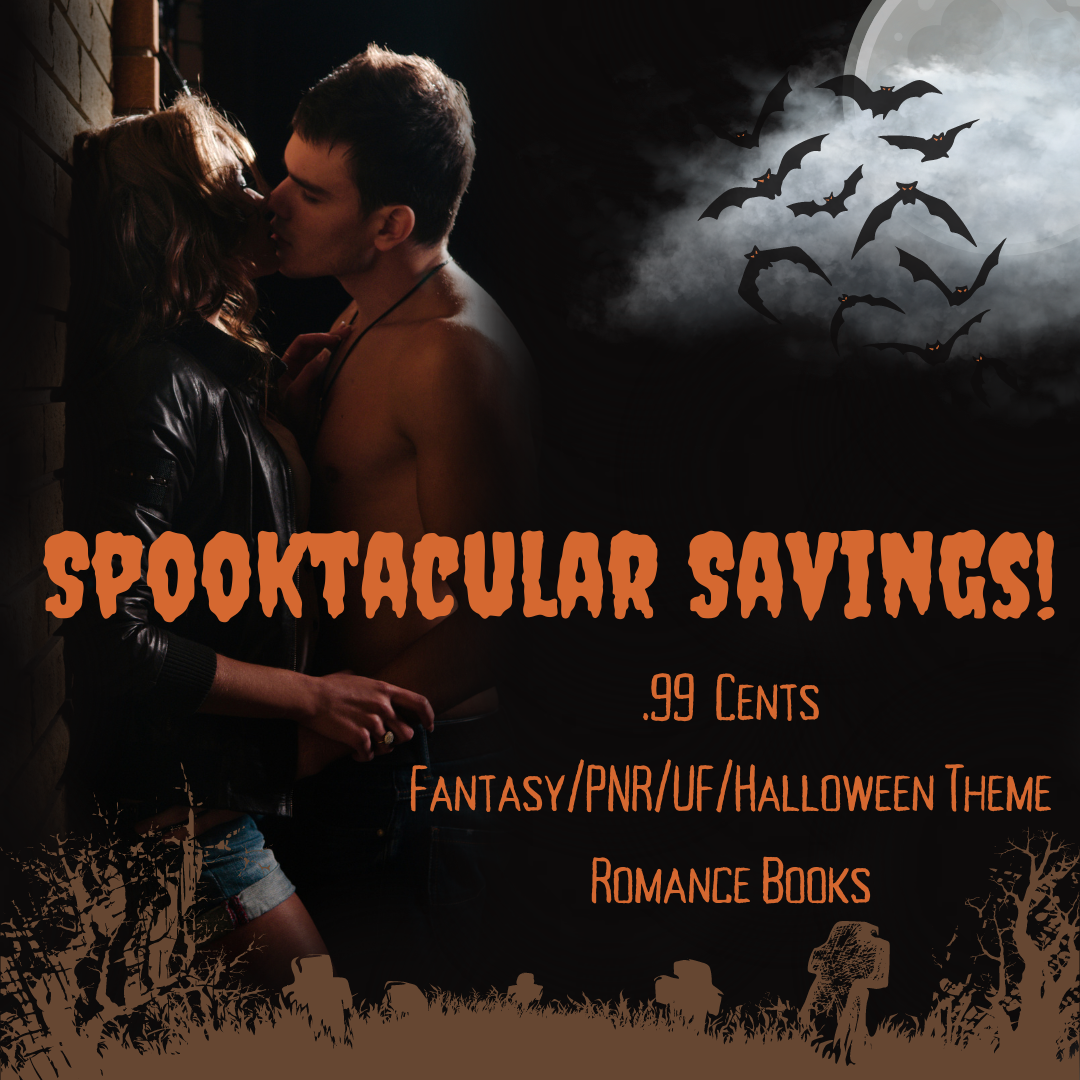 Over a dozen authors have teamed up to bring you spooky savings this Halloween season! 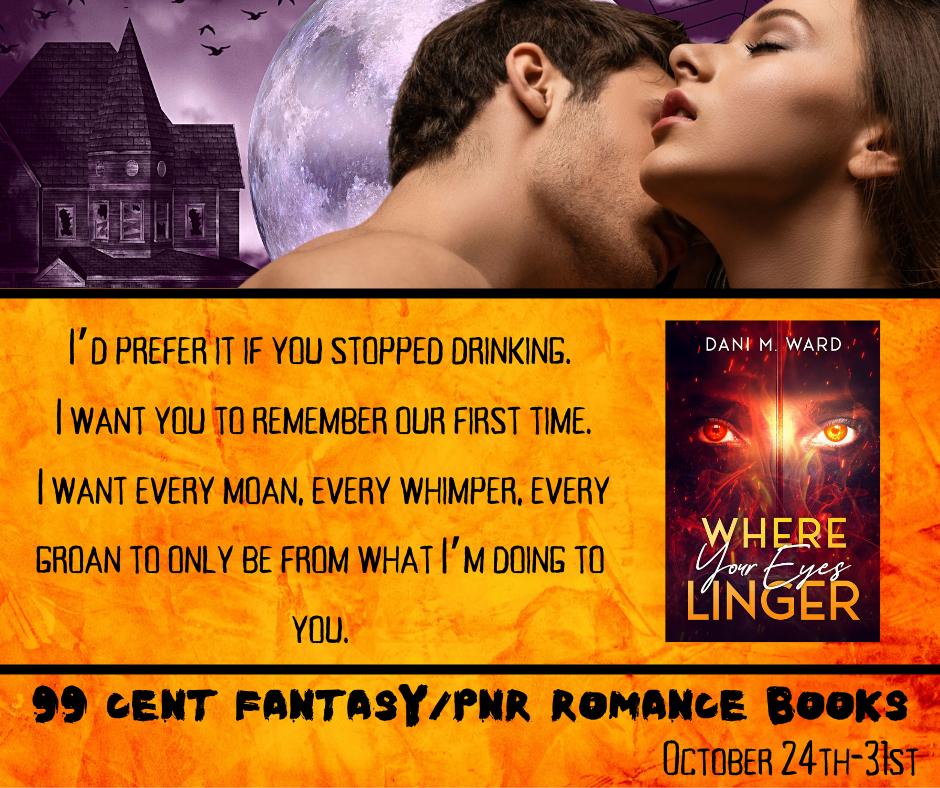 Where Your Eyes Linger

Jameson is an exotic dancer… …who can make her entire body explode into flames. Fire fae Jameson has a problem. Namely, her ex, who wants her back at all costs. He is a prince, but he was also abusive and controlling, which is why Jameson had to start a new life without him nine months ago. And she’s never going back. Her new job as an exotic dancer is freeing, exciting, and pays good money. And she has attracted a human admirer, named Emmett who comes to see her every night, taking in every one of her shows, and showering her with attention. Jameson loves all of it but must be cautious… Can she fully trust him? Keeping her ex at a distance and Emmett by her side is more than a full-time job, but she must keep going to remain safe and live the life she’s always wanted. But will her ex get to her first?

Odile, Legend of the Black Swan

Enter the world of the Black Swan, a dark and seductive tale where things are not always as they seem. Odile is the reviled villainess of Aarroughac, a castle inhabited by the evil wizard, Count Rothebart. After a sinister magic sweeps through the land and results in death, Odile is accused of the crime. Von Rothebart vanishes, leaving her to face the wrath of an entire kingdom alone until a mysterious stranger with powers of his own comes along. 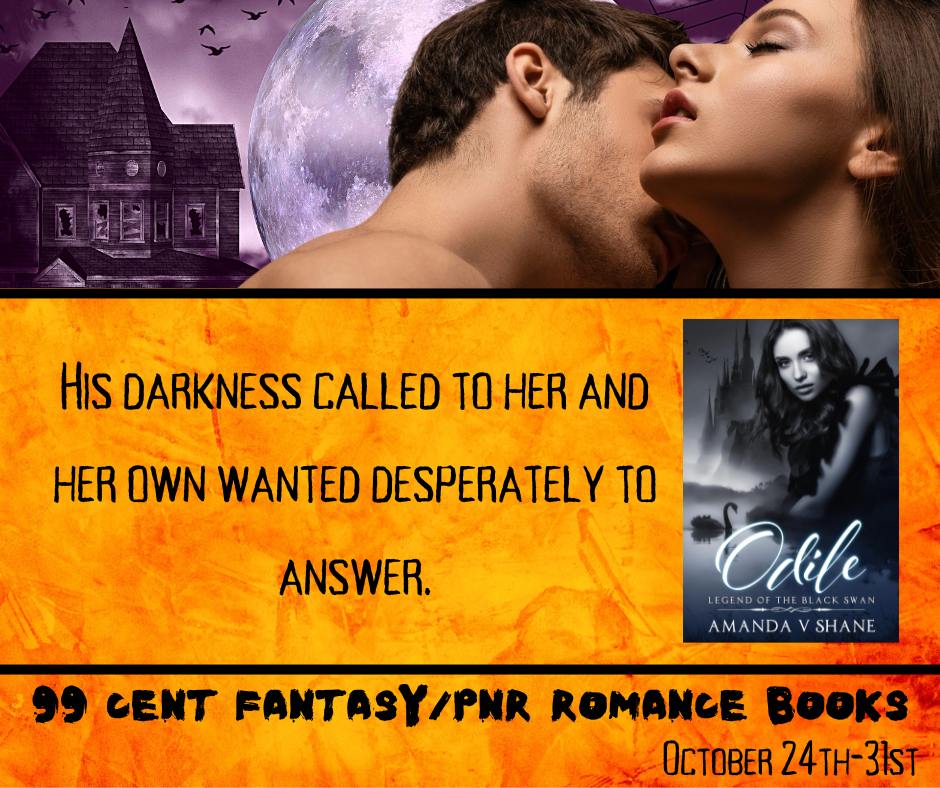 With vengeance as his guide, Lord Azarus di Caspari hunts an ancient curse. When he crosses paths with the Black Swan of legend, he immediately makes up his mind to use the temptress’s magic for his own devices. But when Azarus learns that the story of the sorceress might not be true, disappointment gives way to desire. Spells are cast and secrets are revealed, but can love exist in the shadow of two dark hearts such as theirs?

Are the tales of the Black Swan true? Is she a murderess and an evil sorceress to be feared or is she the only thing standing between true evil and the fall of a kingdom?  Only time will tell as the magical story of the Black Swan unfolds.

Odile, Legend of the Black Swan is a stand-alone fantasy, fairy tale romance inspired by the legendary ballet, Swan Lake.

18+ This book contains adult scenes, sex and some violence. If these things offend you please don’t buy this book.

The Solstice of Blood, a night that would change everything.

Humanity was just on the path to normalcy from a pandemic that ravaged the world. It was December 21st, my family and so many others around the world were getting ready for Christmas when the world was attacked. 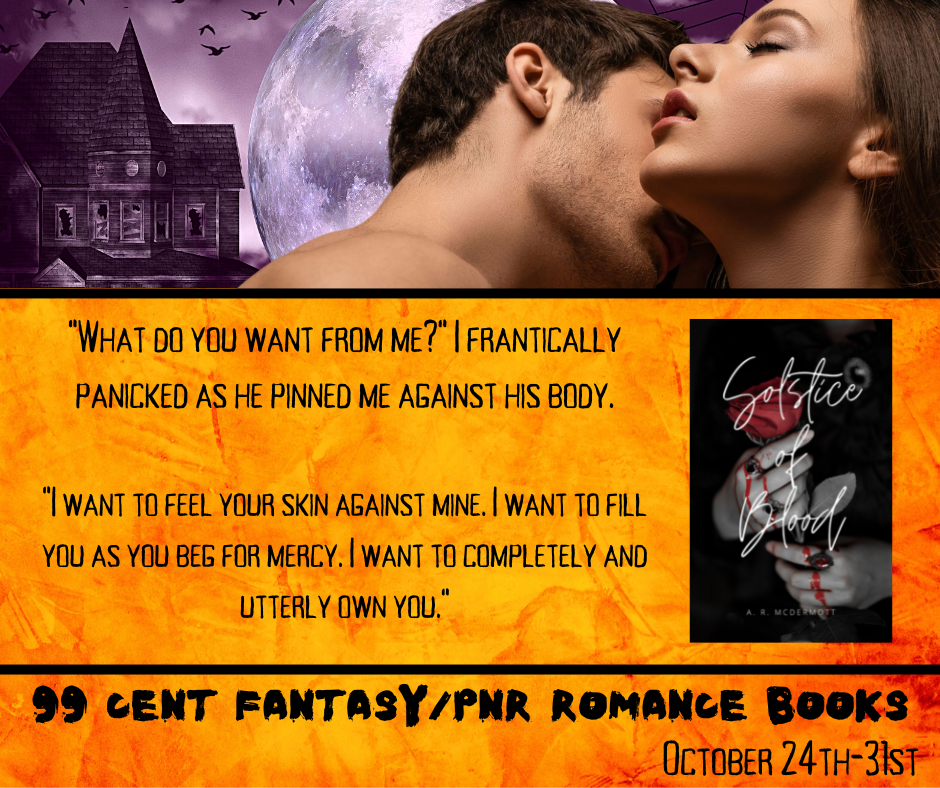 When the vampires took over on the Solstice of Blood, I wasn’t sure how I was going to survive. While on the run, myself and those around me had to make sacrifices in order to survive.

After being captured by vampires, I find myself thrown into the middle of a political war. As I find myself in unfamiliar waters, new allies emerge. I question everything I thought I knew about vampires. Are they evil? Lines blur and secrets begin to unfold as time runs out.

Can I save those I love or will it be too late?
Author’s Note: This is a dark romance novel with mature themes that might make some readers uncomfortable. For mature readers 18+ 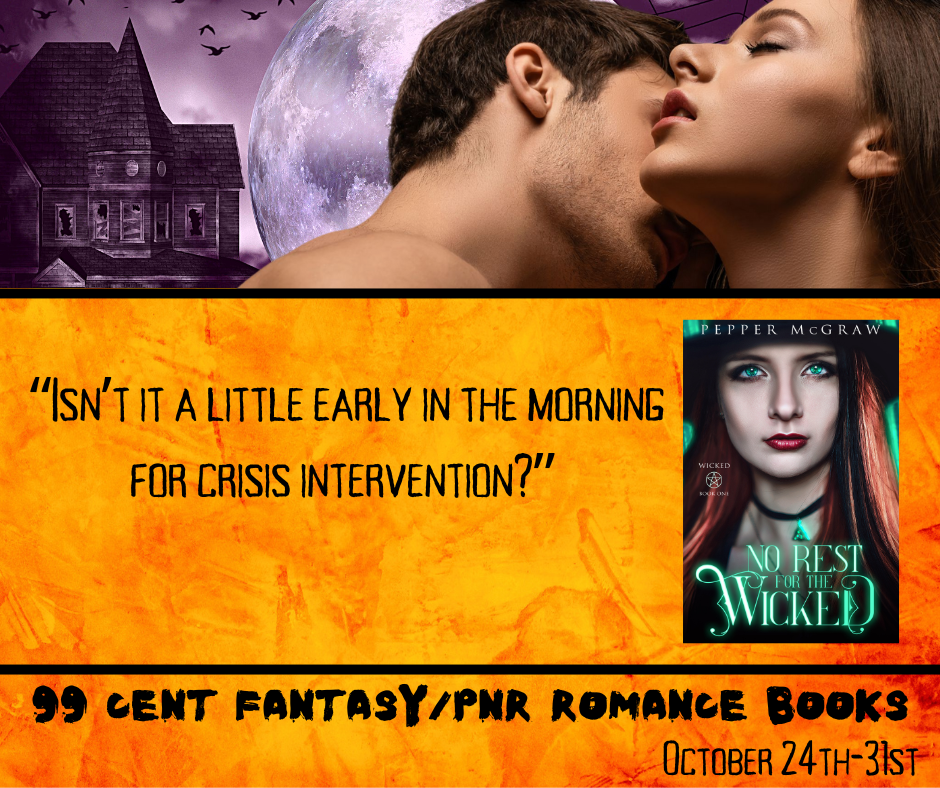 No Rest for the Wicked

Twins. One whose magic is rigid and constrained,
the other’s a hurricane of chaos.

Samantha Covington has always believed that order and restraint are the most important ingredients to a happy and safe existence. She prides herself on her absolute control and if that control somehow messes with her ability to cast the perfect spells, well, so be it. Better an organized life than one of utter chaos like her twin’s.

Sadly, when her mother loses patience with the twins’ inability to control their magics and casts a spell to infect Samantha with a bit of her sister’s spontaneity, Samantha’s life is suddenly a whole lot less controlled. Especially when she’s around Jack Saunders, a man whose sheer masculinity has always tempted her to recklessness. Now Samantha’s in a battle, not just against the chaos her mother has cursed her with, but also against her own sexuality, which seems to have awakened with a ferocity she’s never before experienced.

How in all the chaotic realms will her ordered life survive the likes of Jack Saunders? 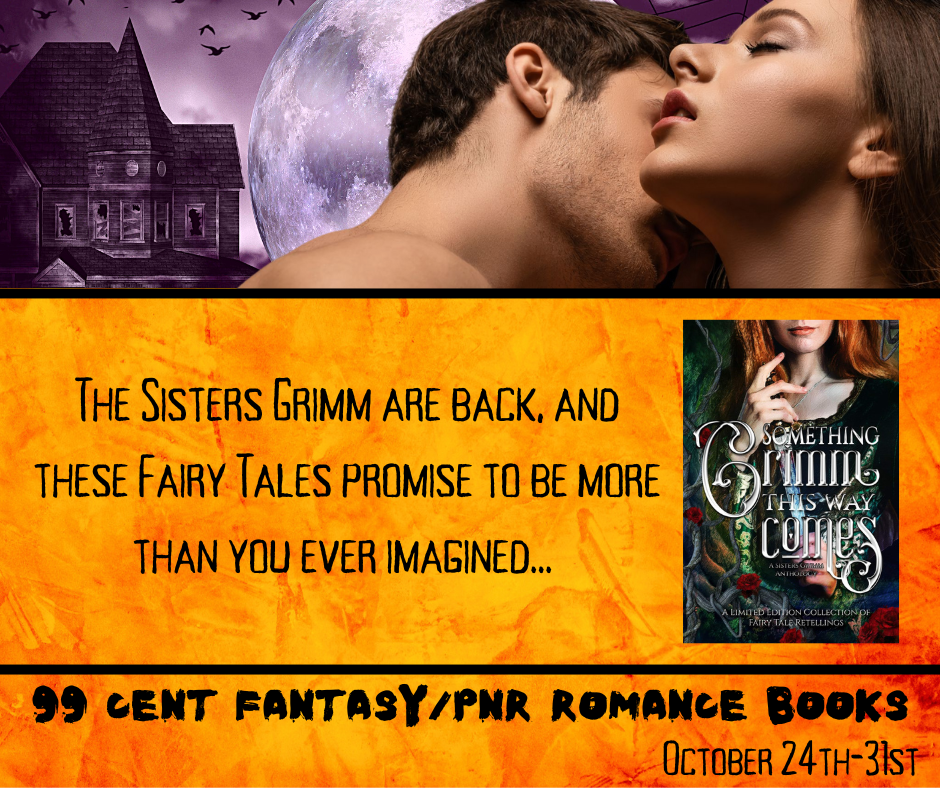 Something Grimm This Way Comes: A Sisters Grimm Anthology

Once upon a time…

There were two brothers who collected tales from their homeland and put them in a book. Stories of magical creatures and horrible fates. Princesses who fell under enchantment and princes who came from the countryside to save them.

These are not those stories.

And we are not those brothers…

The Sisters Grimm are back, and these Fairy Tales promise to be more than you ever imagined…

ARE YOU READY FOR SOMETHING GRIMM?

Delve into the dark romance retellings of classic Grimm tales with these new stories from best-selling authors that will have you dreaming about: Once Upon a Time… 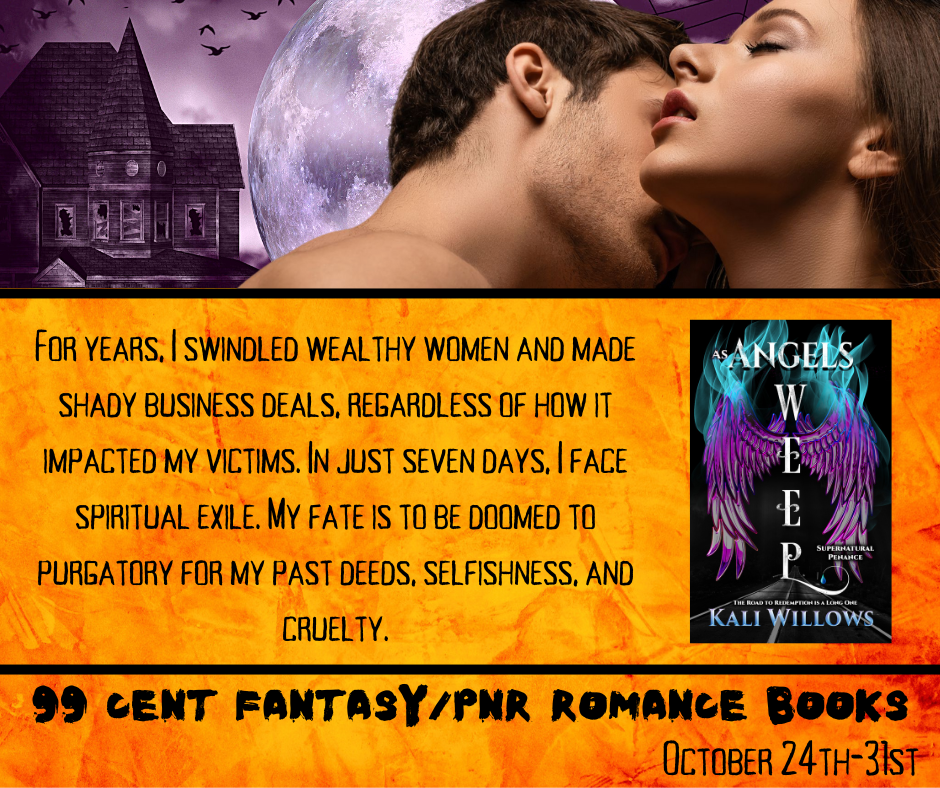 Penance was inconsequential to me once upon a time. Now, for the first time in my life, it means everything. My soul depends on it.

For years, I swindled wealthy women and made shady business deals, regardless of how it impacted my victims. In just seven days, I face spiritual exile. My fate is to be doomed to purgatory for my past deeds, selfishness, and cruelty.

My one chance at salvation? I have an assignment to complete, with rules, strict rules, and unspeakable consequences if I fail.

Whoever said good guys finish last was sadly mistaken. I’d never been a good guy. Now, I have to be one if I want redemption. ~ Luther Evans

These Are for Tears

Too much family drama at home. That’s what Morgan Patterson was thinking when she left the States to finish her final year of college in Northern Ireland. She quickly finds herself immersed in a hidden world of magic, passion and danger with the man of her dreams at the center of it. Only he’s not a man. Tiernan Doherty is an honest-to-goodness faerie lord with family drama of his own. 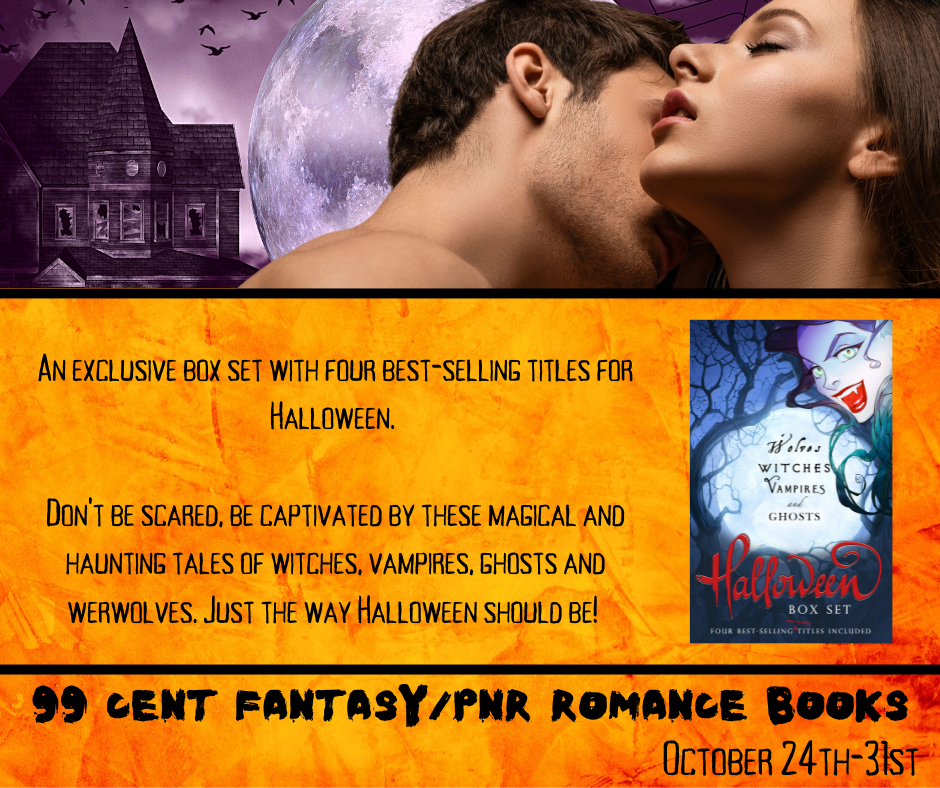 An exclusive box set with four best-selling titles for Halloween.

Don’t be scared, be captivated by these magical and haunting tales of witches, vampires, ghosts and werwolves. Just the way Halloween should be!

Get your copy today, before the exclusive Halloween box set disappears on November 1st. 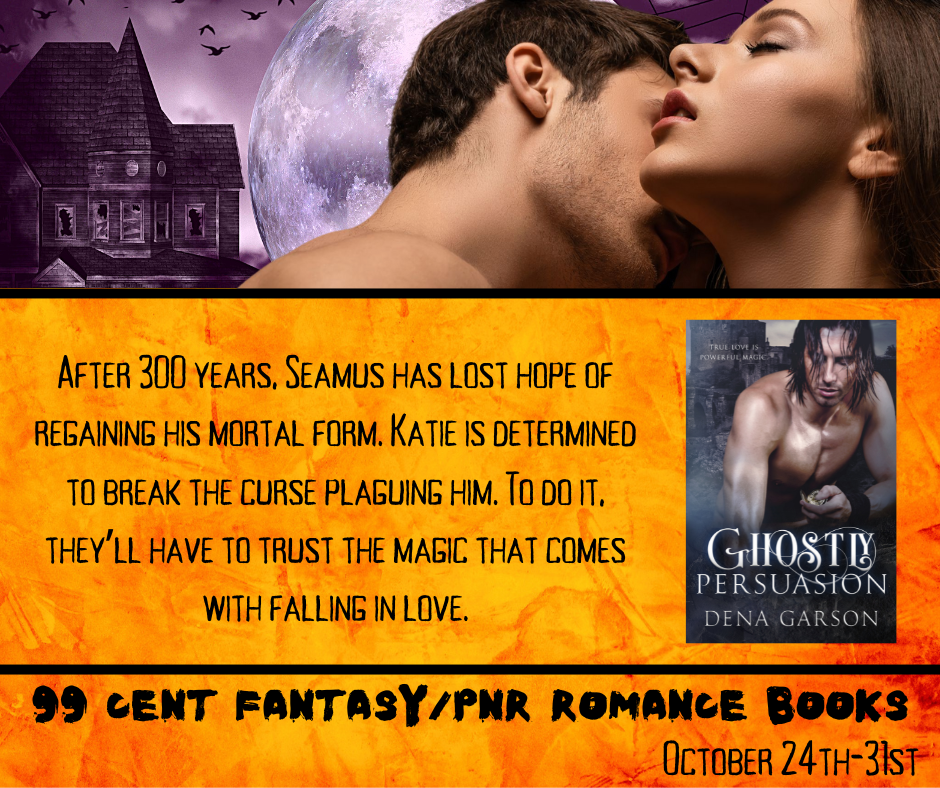 Katie Ward came to Tullamore Castle in Ireland to fulfill her mother’s last request. When she meets the sexy spirit who frequents her suite she is drawn into in his plight. Despite a lifetime of denying her abilities she uses her time at the castle to unravel the mystery of his curse.

Seamus MacDonhnaill had been a woodworker at Castle Tullamore during one of the original expansions. Now, because of the selfish wants of scorned woman, he is cursed to wander the grounds in spirit form. After centuries alone, he’s elated to learn the beautiful American tourist staying in his favorite suite can not only see him but communicate with him.

The two are drawn closer as Seamus reveals not only Tullamore’s history but also the carnal delights to be found in the secret corners of the castle. Katie is determined to break the spell on him before returning to America. To do it she’ll have to enlist the help of the local witch and a few castle ghosts but a chance at true love is worth the risk.

Nurse Sky, who has a troubled past and a secret that restricts her life, finds comfort and love in the arms of Benedict and Vicktor. The unlikely vampire and werewolf best friend duo help their newfound love to overcome her traumatizing past and show her that she deserves to enjoy her life to the fullest.

As they fall in love, Vicktor and Benedict’s past catches up to them, and Sky is captured by their worst enemy. Will they be able to save her?

Genres: Enemies to Lovers, Slow Burn, Badass Heroine, Possessive Alpha, Touch her and I unalive you 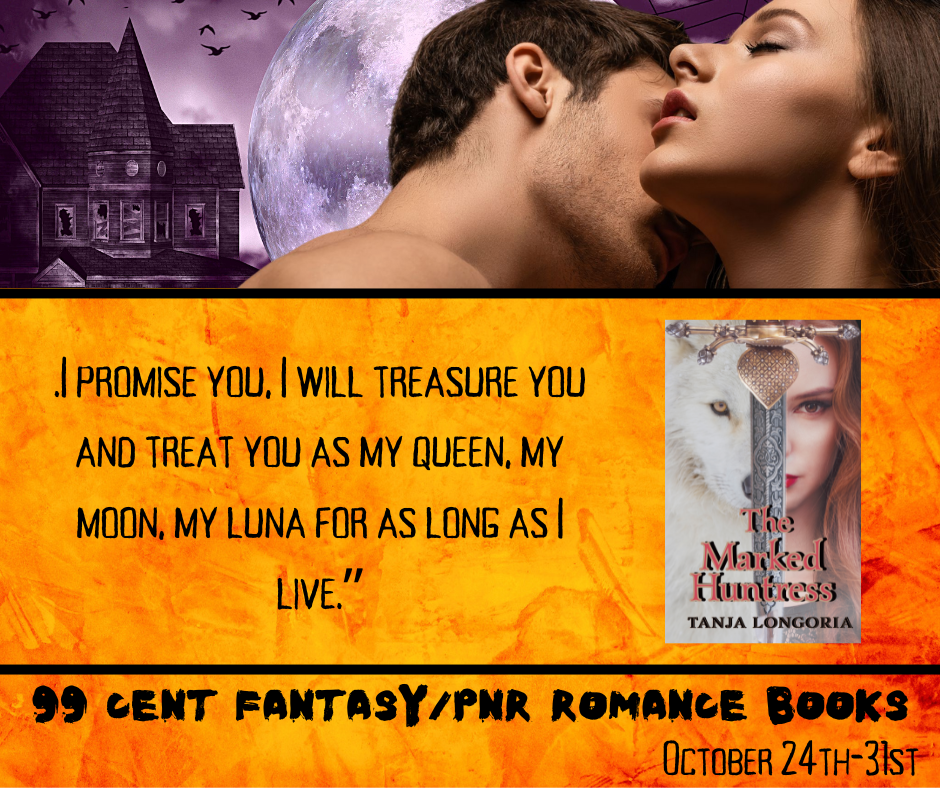 Mellowic grew up as the daughter of a hunter, trained to fight the supernatural. When she meets her fated mate Kaine, a werewolf and alpha of the Silvermoon Pack, she does exactly that; fight him.

Unable to contain his impatient wolf Kaine marks Mellowic without her consent, making her luna of his pack. As Kaine tries to regain her trust the pack undergoes life-altering threats in which Mellowic’s strength as luna and huntress are tested.

Will they overcome their differences and save their pack? 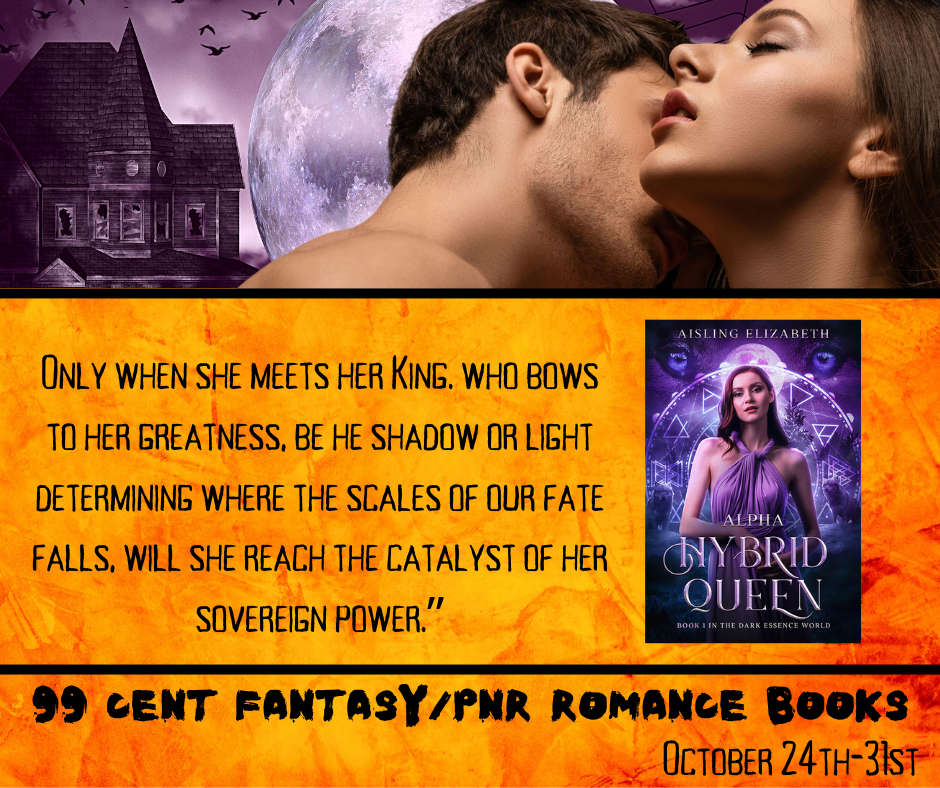 “A vessel made from two great powers. Of both Alpha beast and Priestess witch.”

The last thing rogue werewolf Kaeleigh wants to do when she discovers she is the fated mate of Chase, the future Alpha of the Dark Moon pack, is to be bound by pack structures and hierarchies. Especially since her secret is that she can’t shift. But a dangerous unknown enemy and a tragic death put her life and the lives of those around her at risk, and Kaeleigh finds herself in the centre of a feud between two Alphas.

Everything is in question as secrets come out, curses and prophecies are revealed and hearts are broken as Kaeleigh must choose between the cursed love of her fated Alpha mate and a promise made to the Alpha of the rival pack.

All this and more, in this first of two part fated love paranormal romance story, are the puzzle pieces of a centuries old prophecy that foretells the rise of a powerful queen who is destined to become the leader of a new supernatural hybrid species.

Please note: This is the first in a duet and ends on a cliff hanger. 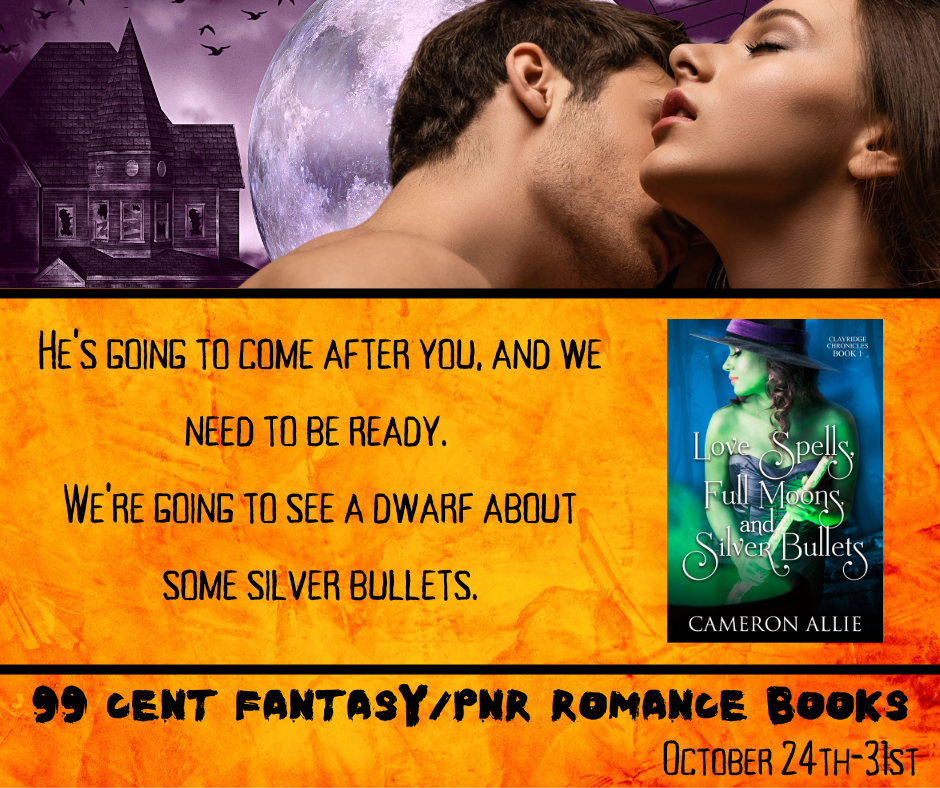 What do you do when your ex’s werewolf boss wants to feast on the mortal you’ve sworn to protect?

Quinn was unaware of the love potion her meddling cat dumped into her tea, so when Ian Hannigan ends up injured on her property, she thinks she’s dealing with another mortal, not the man who can help mend her heart. Her life becomes a balancing act as she attempts to keep him safe while hiding secrets better left buried with the dead.

In a realm filled with things that go bump in the night, Ian didn’t expect to find security and happiness in the arms of a green-skinned witch, yet for the first time since his parents’ tragic car crash, he’s found some measure of peace. The rumors he hears in Clayridge aren’t pleasant, but Ian knows there’s more to Quinn than what people would have him believe. If he’s placed his trust in the wrong hands, he’ll be paying with more than just his heart. He’ll pay with his life. 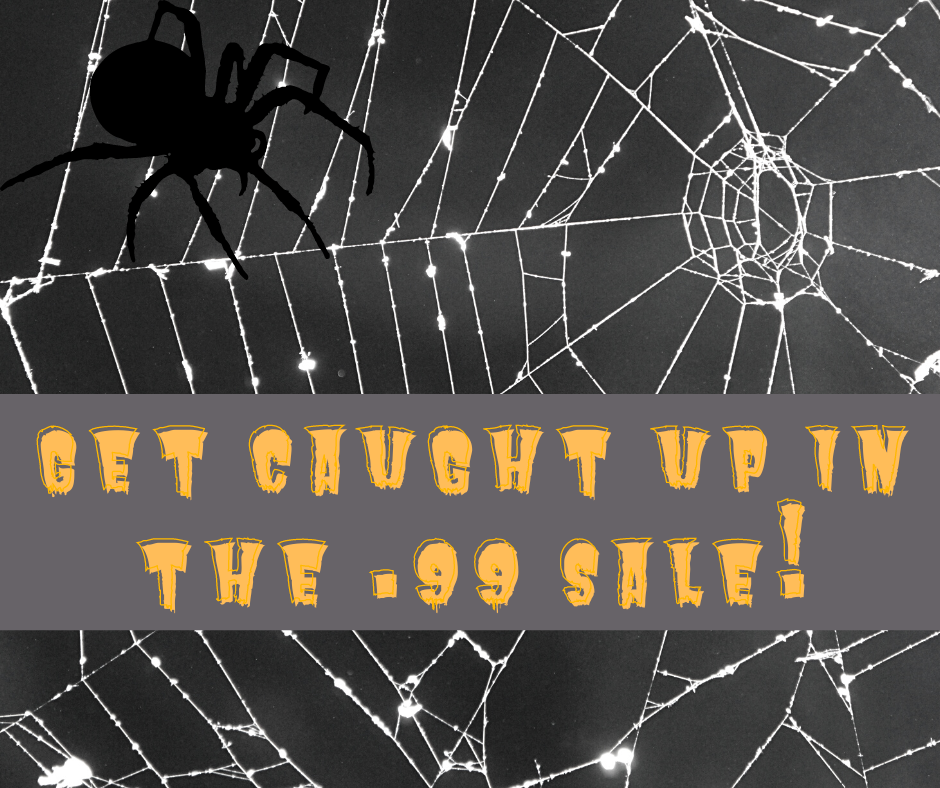