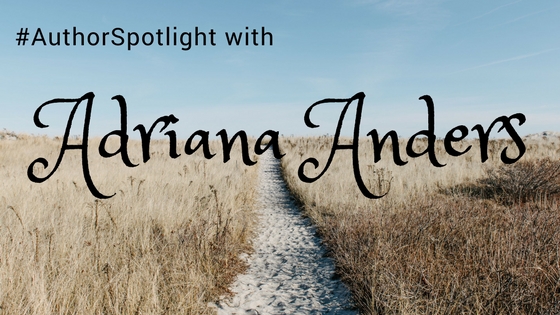 So how did I meet Adriana Anders? When I attended RT in May, she was my table buddy at the giant book fair. We shared a 2X6 space, and between signing books and giving away swag, we had a chance to chat and get to know one another. She’s a wonderful woman with unique stories, so I invited her to join us on #AuthorSpotlight.

Hi there! Thanks so much for having me today!
I’m Adriana Anders and I write romance that’s sometimes dark, but always sweet, steamy, and full of characters that feel as real as your next door neighbor. I live in the foothills of the Blue Ridge Mountains with my tall French husband, two small children, and two black cats. In the past year, Sourcebooks put out my first three books—the Blank Canvas Series—and I had a novelette featured in an anthology with a few of my favorite authors—Rogue Desire. It’s been a big year!

IN HIS HANDS, the third Blank Canvas book, just released on August 1st! A standalone like the first two books in the series (UNDER HER SKIN and BY HER TOUCH), it features Luc Stanek, a gruff winemaker who wants nothing more than to be left alone with his vines. Abby Merkley has other ideas. She escapes from the cult next door and asks him for a job, setting off a chain of events that pushes Luc to choose between this woman and everything he’s ever worked for.

Oh, yes. True love is out there. Soul mates, I feel different about. The thing is, I think most of my soul mates have been my best friends and I also think that you can have lots. People we respond to deeply. Love, partnership, however, is about that initial zing, followed by lots and lots of hard work and compromise. That’s not really a romance author’s answer, is it? But I’m married to the love of my life and, though it’s not always smooth sailing, he is totally my Happily Ever After. He completes me and I knew he was The One the night we first met. That’s a better response from a romance writer, right? 🙂 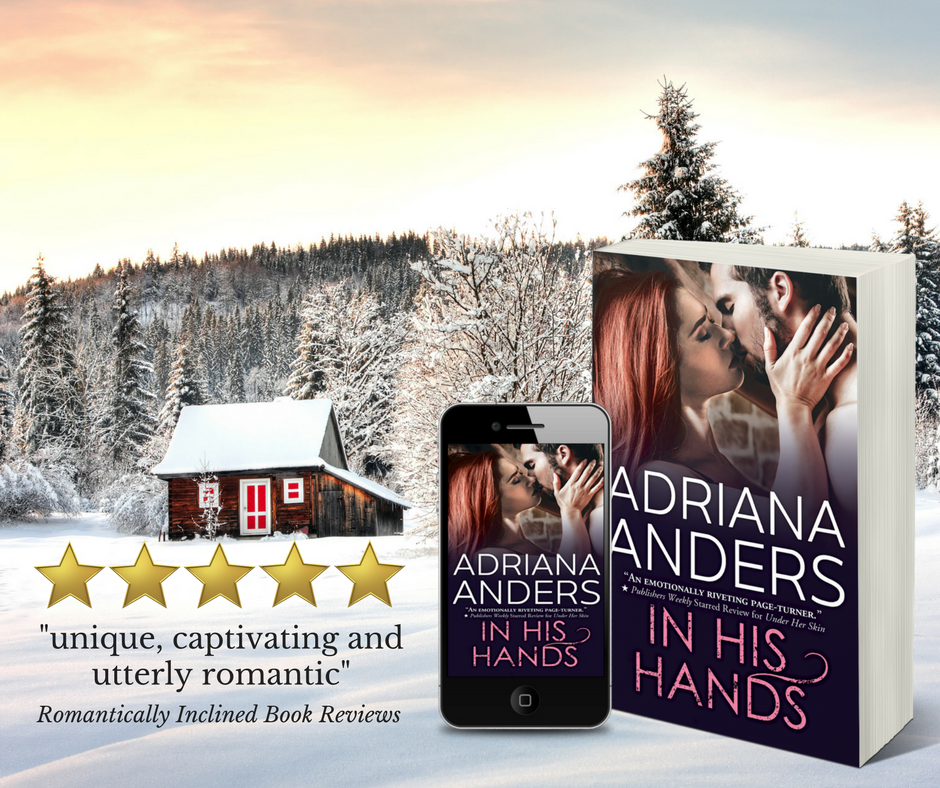 Oh, man. ALL OF THEM! I mean, yes. I can think of influences from my childhood on. As a preteen, it was M.M. Kaye’s Far Pavilions and everything by Elizabeth Peters (Barbara Michaels). These were the books my dreams were made of. After that, I had a long Julie Garwood phase and read a lot of mystery and suspense. It was only a few years ago, though, that I discovered authors like Anne Calhoun, Cara McKenna, Charlotte Stein, and Susan Elizabeth Phillips. These were the ones who helped show me the way.

Real life influences my writing every day. My Blank Canvas series takes place in the foothills of the Blue Ridge mountains, which is where I live. Under Her Skin—the first book in the series and the story that set it all in motion—was inspired by the true story of a woman who removes the tattoos of survivors of abuse and ex-gang members for free. Recently, I wrote Grassroots, a story in the Rogue Desire anthology. It’s about a preschool teacher who runs for office on a local level and it was inspired by my job at a nonprofit that works with young children, and recent experience canvassing for a friend who ran for Commonwealth’s Attorney.

Today, I’m sitting in this amazing place in Washington state and I’ve got half a dozen stories brewing, all based right here! I’m lucky to have lots of sources of inspiration!

Marketing. 100%. I love writing. I love editing and revising. I don’t mind copy edits or any of the other phases involved in writing a novel. What I have a hard time with is marketing and that’s because it’s time-consuming, exhausting and, above all, takes me away from writing. So, in some ways, the worst part of writing happens once you’re published. For those writers still in the early phases of creation, I would say, ENJOY IT! 🙂 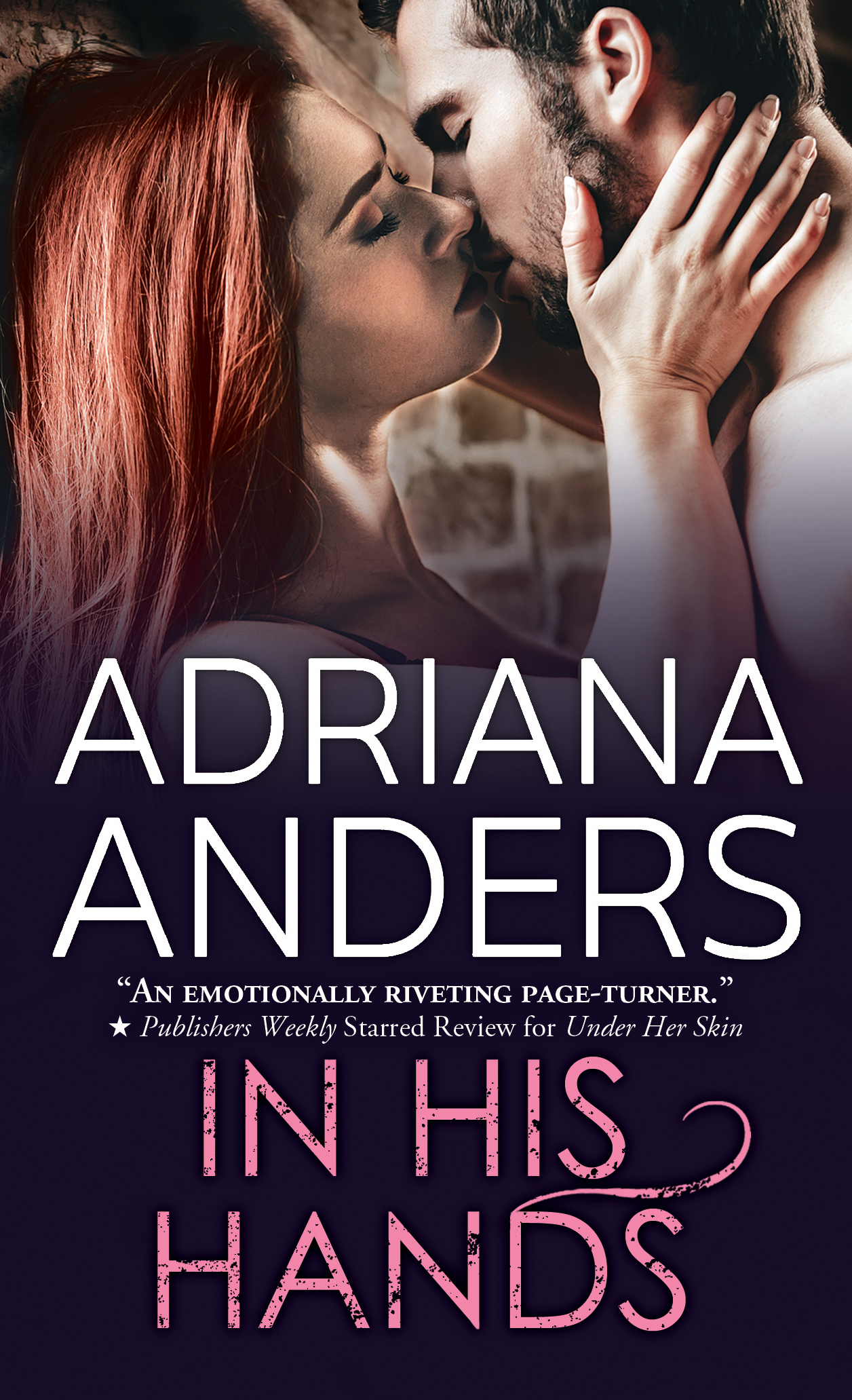 ABOUT IN HIS HANDS:

The rules are simple:
Never speak to outsiders.
Never yearn for something more.
And never, ever seek the pleasure of a stolen kiss…or a whispered promise that with him, she can finally be free.

Abby Merkley has been a member of the Church of the Apocalyptic Faith since she was a child, and there’s no way out…until her darkly handsome, brooding neighbor defies the rules and takes her into the safety of his arms.

He should frighten her, but everything inside Abby thrills at Luc Stanek’s rough manners and shockingly gentle touch. He excites her, ignites her, leaves her shaken and wanting more. But evil men follow in her footsteps, and it may take more than one fierce beauty to defend her loving beast.

IN HIS HANDS (Excerpt)

This was Luc’s problem. This uncontrollable yearning to feel things—things he’d gotten away with avoiding these past couple of years. He didn’t just want to touch and feel a woman’s body—he wanted to throw her over his shoulder and ransack her. Not just experience her, but consume. He’d held on until tonight, but then he’d gotten his mouth on her, and he was gone.

There were women who wanted this sexual voraciousness, he knew, but not Abby. He would never do that to Abby. He’d rather shut himself down, tie himself up…disappear.

But then she sat back, eyes glittering in the dark, and asked for more. What do we do next? A siren’s song of pleasure.

He swallowed, taking her in where she sat astride him—those breasts that were soft and warm and heavy, her skin even lighter than he’d imagined, her nipples sharpened by desire. Her smell was different from any other woman he’d been intimate with—pure in its humanity. She was sweet musk, unadorned—unadulterated by the chemical stink of perfume.

Face crinkling, she asked, “If we were normal—and I know we’re not,” she added with a smile, “what would you do?”

He half shrugged and swallowed. “I’d touch you, probably. Find out what you like.”

“I like this.” He worked his hand out from under her and ran it over the underside of one breast. It was plump and pale and so soft. From there, he let his hand slide away from her breast, ran his knuckles down to the slight swell of her belly, around to one lush, freckled hip, and then did a slow, rasping drag up her arm, over her shoulder, and to her neck.

Christ, this neck had haunted him—so slender and sweet, untouched by the sun. He shifted her down so their crotches lined up, with just the blanket separating them. From there, he sat up a bit, bringing their torsos close and letting him breathe her in.

The little sounds that she made spoke of undeniable pleasure, arousal, and surprise. When he caught her eye, she shook her head and looked away.

He wished, in that moment, that he was a different sort of man. One who knew the right words, could spout a line or two of poetry.

His hand cradled her throat as she swallowed. “I didn’t know.”

“What I was missing.”

His smile was satisfied as he ran his hand from her nape along that braid and down her back, where it brushed a bandage.

Everything except for the pop of the fire and the crazed whimpers she made while she rocked against him.

He blinked, reality setting back in. Her scent and her taste and the sight of her eager and open had made him forget those bandages on her back and what lay beneath them.

He sat still, upended and suspended—on the cusp of so many things.

STAY IN TOUCH WITH ADRIANA: