A couple of weekends ago my husband and I watched Sahara. Now we’d both seen it before, but we were in the mood for a clever, amusing, action flick, with just a touch of romance so we popped it in the Playstation.

One of the (many) things I love about that movie is Steve Zahn’s character Al Giordino. He’s the perfect beta hero. He’s funny, smart, cute, brave, and capable (capable being a big part of what makes him an excellent beta hero). While Matthew McConaughey’s character Dirk Pitt is obviously the alpha hero, he wouldn’t be able to accomplish what he does without Al’s help.

Barber is one of my all-time favourite characters in any book ever. He’s introduced to us in Simon Say, book two of Foster’s MMA series. He’s the heroine’s best friend and confidant. He’s the lead singer in the rock band, but also trains and teaches Muay Thai. He’s got the hots for Dakota (the heroine) but doesn’t realize how in love he is until she meets Simon.

Barber is a great character because he’s funny, capable, a good friend to Dakota, and he’s got awesome sex appeal. But I think what draws me to him is how he digs at Simon. He knows Simon and Dakota are meant to be together, but that doesn’t stop him from poking Simon every chance he gets. LOVE HIM!

Chris in Lori Foster’s Men Who Walk the Edge of Honor Series: Chris Chapey became a fan favourite in Foster’s badass Honor series, about sexy alpha men who fight human traffickers. Chris is an essential part of the heroes operation. While he doesn’t work in the field, Chris runs all the “behind the scenes” parts of the business. He basically runs the company, does research for the heroes, and provides them with whatever they need, when they need it.

Again, Chris is funny and capable (there’s that capable component again!). He’s a good judge of character, and is strong-willed. He’s also hot and spends most of his time walking around in swimming trunks and shorts.

Any of the Knight Brothers in Gaelen Foley’s Knight Miscellany Series:

I love this series, and have re-read it multiple times. There are seven books in this series. Each book focuses on a different couple, but characters from previous and future books are weaved throughout the series. Five of the books are based on the brothers, one focuses on the sister, and one focuses on Lizzie, the best friend and basically adopted member of the family. 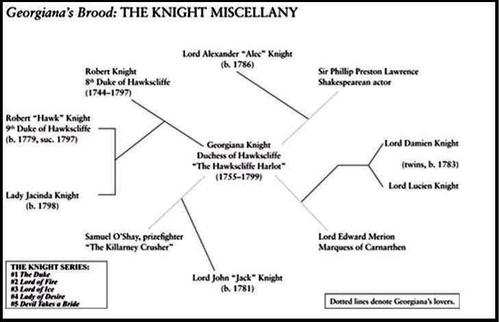 The family is connected through their mother who married a duke but the marriage wasn’t a happy one, and as such she had some adulterous flings, resulting in 4 of her 6 children. Society knows what happened and rumors about their mother have a huge impact on how they develop into adults. It also brings them closer together as a family.

I think that’s one of the things I love about this series, how the family stands together and fight for one another. Some of my favourite scenes throughout the series are when the family is all together, like the snowball fight in Lord of Ice (which I’m sure is a fan favourite!), or when Billy asks permission to marry Jacinda, all the brothers are there to question him.

All of the men are alpha heroes, strong, sexy, passionate, and smart. They each bring something different into the mix. It’s always a fun moment with a favourite character shows up in a series. The entire series is wonderful and has great secondary character moments.

I’m trying not to make this into “the Lori Foster show” but I’m a huge fan of hers and she does series so well, and writes such awesome secondary characters, that I find it hard to avoid including her multiple times.

If you’ve read the Ultimate series you know what I’m talking about. Fans have their favourites, and while Cannon makes one hell of a hero, Armie definitely stole the show. He rapidly became the favourite of the series.

He’s the guy that everyone calls on. He’s sexy, has a dirty sense of humor, and loves watching the other guys fight falling in love. He’s loyal and trustworthy, and has a quick wit. One of the things I love about him is the rapport he builds with each heroine. He quickly befriends each one and spends good chunks of the book teasing them. I love that Foster puts us in his POV in each book, so by the time we get to his book we’re already in love with him.

His downfall: his best friend’s little sister (If you didn’t already know I love that trope! LOL). One of the best things about this series is watching Armie and Marissa dance around each other. It’s clear to the reader they’ve got a strong thing for one another, and damn does it keep you turning pages!

This is a recent find for me. Within the last few years I started reading Aline Hunter’s work and quickly fell in love. Although, sadly, I bought her books from Ellora’s Cave before I knew what was going on with that publisher. Hunter is unfortunately one of the authors who became a victim of Ellora’s Cave, so I’m sad that she probably didn’t get paid for my purchases, but am happy that I discovered her. From reading her FB posts and website she’s had a rough go of it lately, for multiple reasons, but she hasn’t given up! I’m happy to know that she’s working on re-releasing all her old titles and publishing new ones (which is wonderful because she’s got me hooked on the Wolf’s Den series).

So now to tell you about Declan. Declan is the beta werewolf in book one (Marked) and gets his own HEA in book two (Changed). He’s the funny guy that pokes fun at all the couples, until he falls victim to love himself. He works with his Alpha, Jackson, at a tattoo parlor. He’s Jackson’s right hand man and falls in love with Jackson’s mate’s HUMAN best friend. I’m not going to give anything else away, but he sold me on book two. Hunter does a wonderful job of giving us just enough information about the secondary characters to make us want the next book. If you like erotic paranormal shifter series I recommend giving her a try.

So tell me….who are your favourite secondary (or beta) characters?