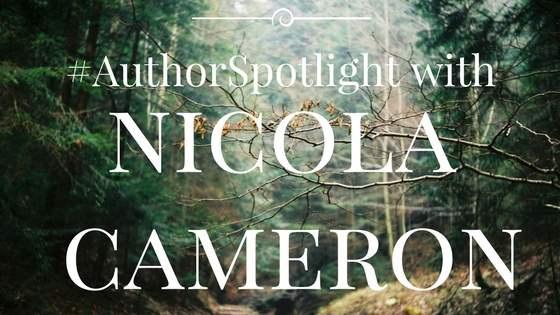 Nicola Cameron is a new to me author, and while I’ve picked her brain in the last few weeks, I’m very much looking forward to getting to know her better today. She’s a woman of many talents, who writes in multiple genres. She’s here to tells us about them today.

So let’s get to know Nicola!

I’m a married woman of a certain age who really likes writing about science fiction, fantasy, and sex. I’ve been writing SF professionally since 1995 and SF/fantasy/paranormal romance since 2012. When not writing, I like to make Stuff™. And I may be rather fond of absinthe.

The husband is a lovely Englishman who’s been schlepping me around the world since 1993, and I’ve picked up a couple of languages along the way. And while we do have five cats, I have to stress that I’m not a crazy cat lady – my husband is a crazy cat dude. There’s a difference.

My newest release, Shifter Woods: Howl, is a paranormal romance that was originally intended for an anthology. Real Life™ got in the way, as it tends to with me, and I missed the deadline but had over half of the story done so I decided to expand it into a novella and self-publish it. I’ve been describing it as “What if Longmire was a coyote shifter” – reporter Laurie Rivera is on the trail of a prostitution ring that’s been targeting homeless women, and winds up running for her life in the Sandia Mountains near Albuquerque, NM. She’s rescued by widowed Alpha coyote shifter and sheriff Caleb Lynch, who realizes to his shock that Laurie is not only a coyote shifter but his new heart’s mate as well. But Laurie has really good reasons to dislike Alphas, so Caleb has to convince her that he’s the mate for her and help her bust this ring. And then, as I like to say, hijinks ensue. 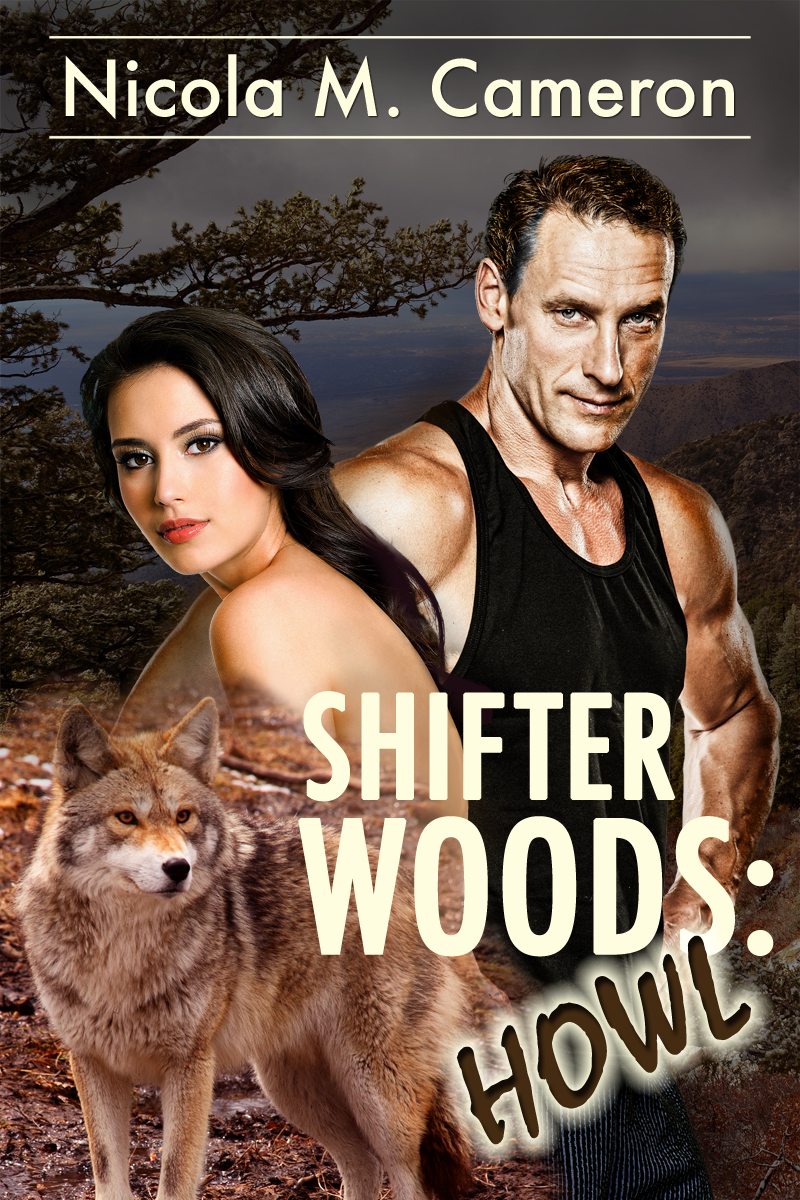 3. You write M/F as Nicola M. Cameron, and you write M/M as Nicola Cameron. You’ve also written in a few genres within the romance umbrella, SF, fantasy, paranormal, contemporary. Do you have a favorite? Is there a particular sub-genre that you have found more challenging than others?

Yeah, I may have a bit of a problem coloring inside the lines. Favorite romance subgenre – sci-fi romance, followed by paranormal romance. Apparently my Olympic Cove series is considered fantasy because it contains Greek gods and mermen, but since it also includes nanotechnology, bioengineering, and Alan Turing, I like to think of it as science fantasy romance. I don’t really have a favorite when it comes to M/M versus M/F – I like writing in both categories.

The toughest subgenre I’ve ever written in so far has been high fantasy romance. I’ve had SF and fantasy authors give me looks of horror when I admit this, but I thought the Lord of the Rings books were boring as hell and I’ve never been a big fan of high fantasy as a result. But when I wrote Empress of Storms on a dare (long story), I wasn’t focusing on the worldbuilding so much as I was on the story of a young queen who was required by treaty to marry the royal father of her fiancé after the fiancé goes missing. Since I wasn’t fussing with maps or magical systems or made-up languages, I enjoyed writing the story far more than I’d expected.

The two books that really prompted me to become a writer are Have Spacesuit, Will Travel by Robert Heinlein and A Wrinkle In Time by Madeleine L’engle. I come by my love of SF honestly.

Oh, God, that happens all the time. In fact, my new cyborg romance novel Degree of Resistance was inspired after author L.D. Blakeley made me sit down and watch Westworld. I was gobsmacked by the delightful and talented Louis Herthum’s performance as Dolores’s android dad Peter, which made me think, “What would you do if you found out your entire life was a fiction that could be changed at the push of a button?” I wound up dedicating the book to him, he has a print copy, and he’s still talking to me on Twitter, which just goes to show that he’s extremely kind and tolerant of goofy writers.

Physical descriptions and emotional reactions. I’m a whiz with dialogue and I enjoy plotting, but actually having to describe what people are doing (if it’s not a big action scene) and how they’re feeling about it without getting repetitive is a challenge. I think in my heart of hearts I’m a screenwriter. I would also like to plug The Emotion Thesaurus: A Writer’s Guide to Character Expression by Angela Ackerman. It and the other books in the series are lifesavers for keeping your descriptive passages fresh and readable.

Laurie wants a news story. Caleb just wants to be left alone. But when the coyote shifters’ paths cross in New Mexico’s Sandia Mountains, Fate steps in and gives them something they never expected—each other.

Reporter Laurie Rivera is on the trail of a white slavery ring when she’s forced to run for her life in the foothills near Sandia Crest. Widowed sheriff and Alpha coyote shifter Caleb Lynch comes across the exhausted reporter and discovers to his shock that Laurie’s also a coyote shifter—and his new heart’s mate.

But Caleb never expected to have another chance at love, and Laurie has a good reason to fear being claimed, especially by an Alpha. As a snowstorm traps them in the sheriff’s cabin, Caleb must find a way around the barriers surrounding Laurie’s heart, and Laurie has to confront her past—and the humans who want her dead—if she wants a chance at her very own “happily ever after.” 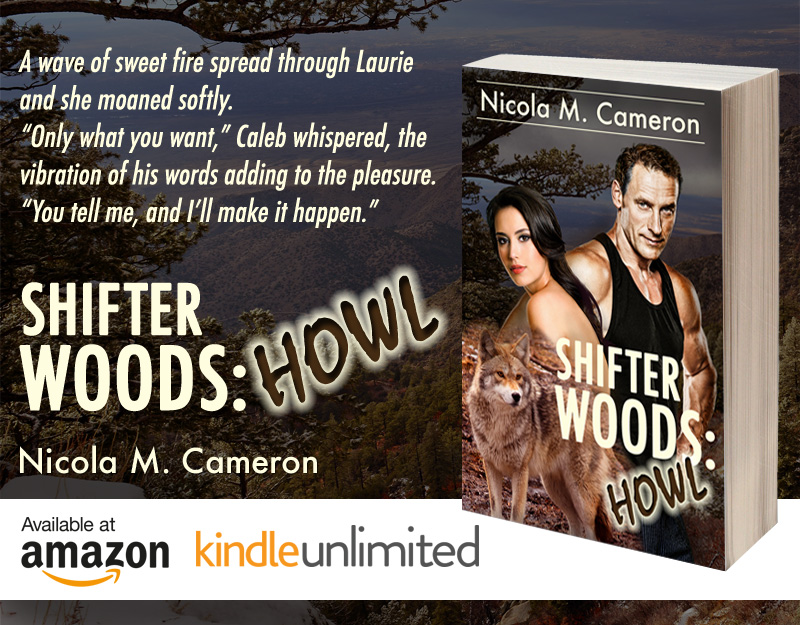 Lynch’s attention sharpened. “Why not?”

Here it comes. “Because I disobeyed my Alpha. I was supposed to mate his son, but I didn’t want to. So I left.” She swallowed hard. “He banished me from LA, then let all the coyote Alphas in California know about it. Apparently some of them,” she grimaced at the memories, “were really looking forward to getting their hands on a rogue female.”

Lynch put his coffee cup down with a hard click, anger lighting his eyes. “Some Alphas need to have a sense of responsibility beaten into them with the business end of a shotgun,” he said, his tone low. “I’m sorry you had to go through that, Miss Rivera, I truly am.”

She had expected condemnation, or at least disapproval. Support was a surprise. “It could’ve been worse. One of them could’ve caught me and claimed me.”

“That’s true.” His mouth quirked. “At least now I know why you’re so jumpy. I was starting to think it was my aftershave.”

The attempt at humor was well-meant, although she knew damn well he wasn’t wearing aftershave. He didn’t need to; his own natural scent was delicious, a combination of salt, leather, and healthy male that went straight up her nose and—much as she hated to admit it—down between her legs, causing things to ache pleasantly there.

Time to offer an olive branch. “I’m sorry if I’ve been rude. It’s just that I know I’m intruding on your territory—totally by accident, but still—and I don’t know you, and…” She trailed off, not wanting to think about the fear that had blazed through her mind after she’d woken up naked.

Lynch waved it off. “I can imagine what you must’ve thought. Rest assured that Esposito County is firmly in the twenty-first century and I don’t practice droit du seigneur with unmated females in my territory.”

She pressed her lips together, trying not to smile.

He grinned. “You mean you didn’t think I knew what it was. Much like a certain fictional colleague in Wyoming, I managed to get a fairly decent education in spite of myself.” He straightened in his chair. “But you can relax. In fact, if it’ll make you feel better, I give you my word both as Alpha of the Big Rock pack and sheriff of Esposito County that I won’t claim you against your will.”

She didn’t know why the reassuring words made her flinch. The absolute last thing she wanted right now was to be unbreakably joined to some Anglo sheriff who lived in the New Mexico hinterlands, right?

Even if he did look mouthwateringly hot and smelled like sex on a stick. “I appreciate your courtesy, Sheriff Lynch.”

“Call me Caleb.” He got up, grabbing his coffee cup. “If you really want to show your appreciation, you could help me get dinner ready.”

“Okay.” She got to her feet, sucking in a quick breath at the ache that flared from toe to heel.

He grimaced. “I forgot. You’d best sit at the table and cut things up.”

“That’s fine, I can do that.” Wincing, she moved to follow him into the kitchen.

And gasped in surprise as he swept her up in a bridal carry. This close, she could feel the heat from his body and the strength in his chest and arms. More alarmingly, she could smell his desire for her. She shivered as her coyote made it very clear what it wanted to do next.

His smile was kind. “Don’t get the wrong idea. Your feet are still tender,” he said, carrying her into a small but tidy kitchen. “I don’t want you stubbing your toe and suing me for police brutality.”

He deposited her at an antique oak table, grabbing an onion, a chopping board, and a knife and laying them in front of her. Two russet potatoes and a bunch of emerald green kale joined the onion. “Do the onion first and I’ll get the meat started.”

“Um, okay.” Her heart was still hammering from the unexpected physical closeness and the effect his scent had on her. “How do you want the onion cut up?”

She nodded and picked up the knife, forcing her attention to the task at hand. But the memory of his touch lingered. He had been close enough to kiss.

And God, she’d wanted to.

Nicola Cameron is a married woman of a certain age who really likes writing about science fiction, fantasy, and sex. When not writing about those things, she likes to make Stuff™. And she may be rather fond of absinthe.

While possessing a healthy interest in sex since puberty, it wasn’t until 2012 that she decided to write about it. The skills picked up during her SF writing career transferred quite nicely to speculative romance. Her To Be Written work queue currently stands at around nineteen books, and her mojito-sodden Muse swans in from Bali every so often to add to the list, cackling to herself all the while.

Nicola plans to continue writing until she drops dead over her keyboard or makes enough money to buy a private island and hire Rory McCann as her personal trainer/masseur, whichever comes first.