Sarah is another incredible author I met through the RWA. A finalist in the RWA’s Golden Heart Contest, Sarah has already been making a name for herself, prior to her first release. I’m expecting some wonderful things from this author ecy9xhv. She’s certainly one to watch.

Be sure to read to the end for an excerpt from Enforcer’s Price, and also a chance to win a Kindle Fire HD 8.

I’m a dog mom to two Boston Terriers, I drink way too much coffee, and I’m a loud talker. I grew up in the Los Angeles area but found my way to Portland, Oregon. I have a day job that is amazing, but sometimes gets in the way of my writing. I love to garden, as long as it’s not for more than an hour at a time. I set a timer. My favorite thing to do is go on vacation, my next favorite thing is to plan my vacation!

My debut book is coming out on February 6th, Enforcer’s Price. It’s a story about a hooker who falls in love with a biker, but the hero doesn’t know that she’s a hooker. I love books where the heroine saves herself and the hero helps her do it. Awkward love scenes are also a favorite of mine. You know that moment where someone says sometime totally wrong and he has to dig his way out? Yes, I love those scenes. Life is imperfect and messy and so is love. I try to write that in my books.

3. Congratulations on selling your first book! Can you tell us a little about the whirlwind of events that you’ve experienced since signing your publishing contract? What have you learned from the experience?

Thanks!! It has been a whirlwind. I went from writing Chapter 1 to being a finalist in Golden Heart to signing with an agent and then a contract with Carina/Harlequin in about 10 months. It was totally nuts. I think my biggest takeaway from all of this is a good editor is worth their weight in gold and I’ve been lucky enough to have some of the best in the business. I learned so much about writing from the three editors I worked with (one is also my agent!) and my book is all the better for the help. I really think I have something special and I’m super excited to share it with everyone! The other item I learned is that this business is incredibly subjective. One person said my story was too dark, another said it wasn’t gritty enough for my genre, and two days later Carina signed me for a three book deal. It was all so nuts, but eye opening about this industry. If you’re a writer who is subbing to agents and editors, keep on trucking – eventually you’ll find someone who believes in you and your work. You just haven’t found the right person yet.

The bad ones. No, seriously. I read a few stinkers on Amazon one night and thought “I can do better than that.” Then, I started reading more books on Amazon and learning from other author’s mistakes. I’m sure someone out there will read my books and pick out a few errors as well, none of us are perfect, but we strive and grow and learn and try. That’s just how it goes with writing.

For a year of my life, I worked at a domestic violence shelter. We saw women from every walk of life – including sex workers. My main character, Krista, is based on a woman I came in contact with at the shelter. I can’t tell you anything about her case, of course, but she and I both read the newspaper every day. Front to back. Then we would talk and laugh about local news and politics. She just disappeared one day and we never heard from her again. This is how I would like to think her life turned out.

6. After the release of Enforcer’s Price, what can we expect to see from you in the future?

Enforcer’s Price is part of the Demon Horde series. Rebel Custody will be out May and deals with a custody dispute and what it means to be a family. Outlaw Ride, coming out in October has major themes of addiction and loyalty. Just like Enforcer’s Price, the next two books deal with the sometimes messy events of real life. Not everything is perfect in the Demon Horde MC. 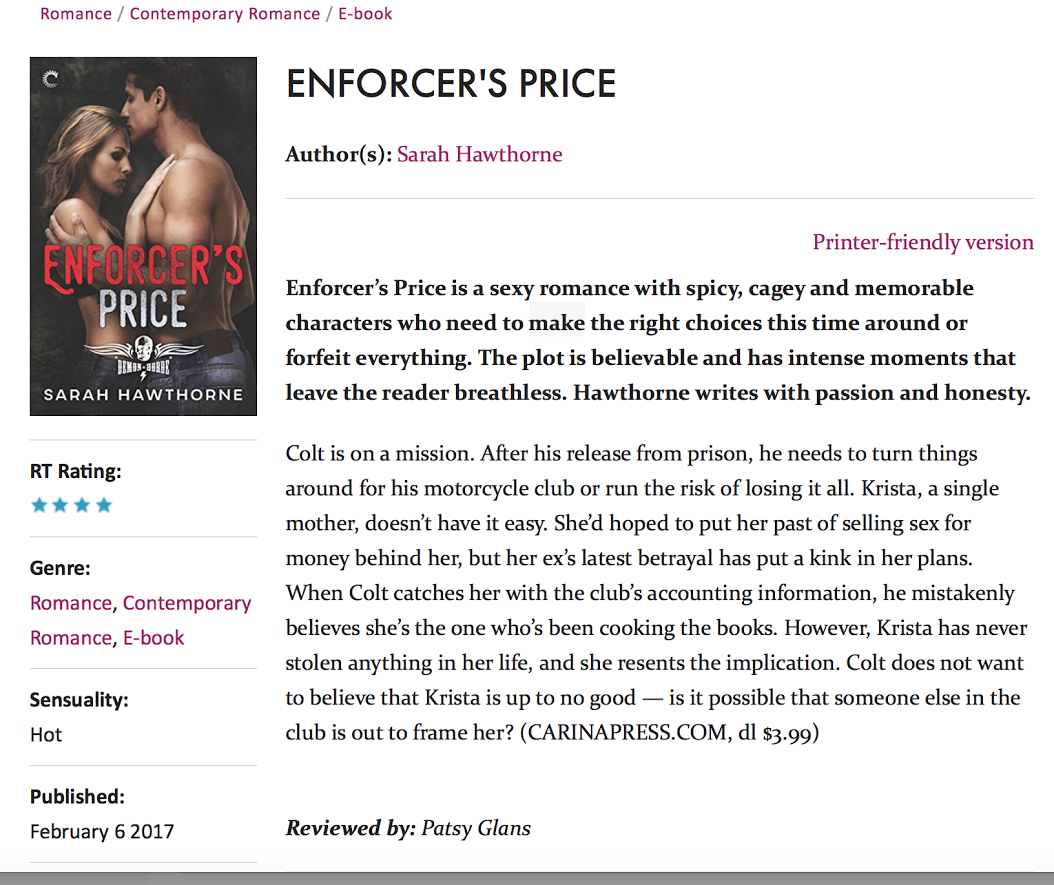 A man looking for redemption

Colt spent eight months in prison for trusting the wrong woman, nearly bringing down his entire motorcycle club in the process. Now he needs to fix the MC’s cash flow problems or watch the only family he’s ever known fall apart.

Falling for her could mean his destruction.

A single mom trying to get by

Krista was ready to leave hooking behind when her ex cleaned out her bank account. Stuck working to provide for her daughter, she protects herself with one rule: never get involved with someone at the club.

Not that she wants to. Sex has become a job, a means to an end.

One night together as an escape

Krista’s body wakes at Colt’s touch, allowing her to imagine a life after the MC. A future. A happily-ever-after, if only briefly. Krista brings out feelings in Colt he forgot could exist. But just as he begins to trust again, Krista’s truth is revealed—testing the very boundaries of Colt’s jealousy and faith.

This book is approximately 70,000 words

One-click with confidence. This title is part of the Carina Press Romance Promise: all the romance you’re looking for with an HEA/HFN. It’s a promise! Find out more at CarinaPress.com/RomancePromise 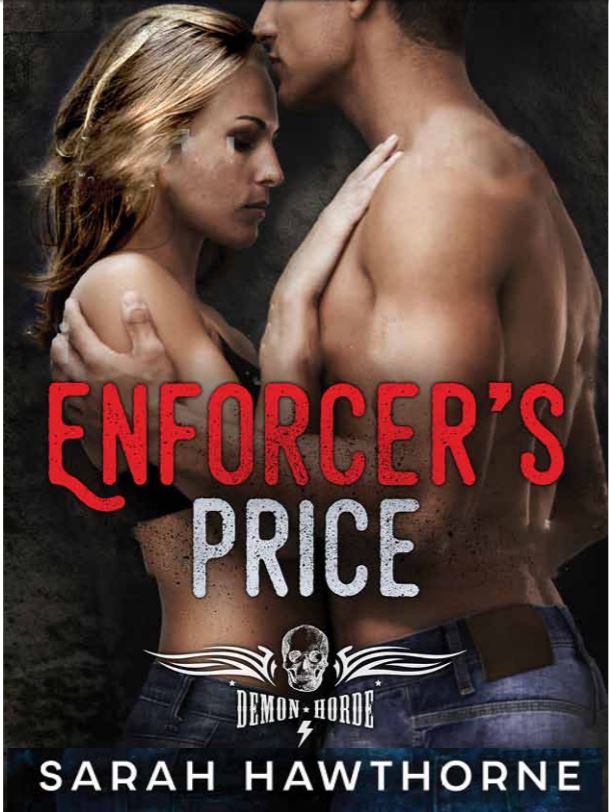 I pulled my daughter closer and rocked her. It was dark in the bedroom and I couldn’t see her face, but her breath was erratic and her voice shaky. Her little chin, normally adorable, was quivering against my arm. I groped around for the blanket on the bed and pulled it around us. Of course, a blanket wasn’t going to save us, but at least it might give Becky a feeling of security.

“Mommy, is that the Big Bad Wolf? Is he going to blow our house down?”

“Krista, goddamn it, open up this fucking door before I break it down!” The pounding continued. He’d been at it for at least fifteen minutes, long enough for one of the neighbors to call the cops.

Not that I especially cared for cops, but at that moment, I would have welcomed anyone who could make Robby stop pounding.

Becky was starting to whimper.

“Shhhh, baby.” Maybe if we stayed quiet long enough, he would think we weren’t home.

That was a pipe dream. He knew we were home. Robby always knew where I was, what I was doing and how to exploit me. I had kicked him out three years ago, but he still kept tabs on me. He used that information to shake me down for money whenever he ran out. Which was often.

Robby had never paid a dime in child support or spent any time with Becky. I realized long ago that he wasn’t going to help me raise our child. He just looked at us as an occasional source of income.

The other moms at Becky’s preschool drove shiny new Subarus and worked part-time because they wanted to. They even took vacations. Why? They married rich men or got an education for themselves. But not me. When I was in high school, I was pregnant with Robby’s kid; now I was paying for it. I drove a duct-taped Corolla and worked full-time slinging drinks and turning tricks at a motorcycle club. I’d never been on vacation in my entire life.

Becky shivered in my arms. “Is the wolf huffing and puffing, Mommy?”

What the hell should I say to a six-year-old? Yes. No. It’s just your father. How should I explain to her that her daddy was the Big Bad Wolf because he was out of meth? Or, worse, that her mommy turned tricks for the money that kept the wolf at bay? 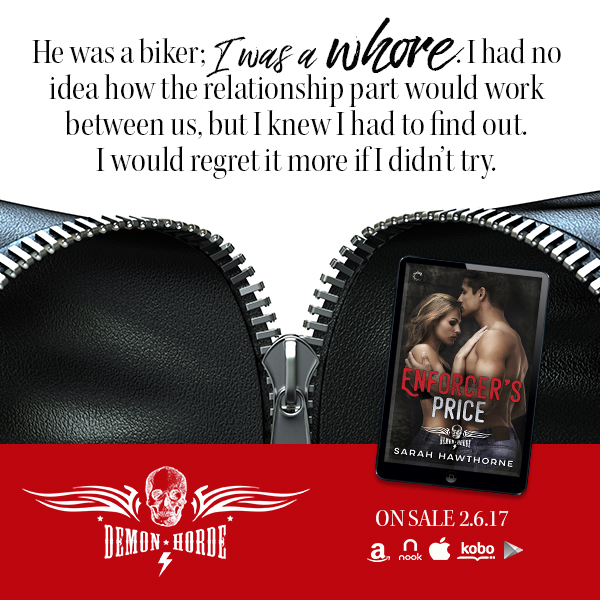 Also, I have a contest on Fresh Fiction for a Kindle Fire HD 8 – with no ads. Enter to win and I’ll send it to you at the end of the month! Fresh Fiction – win a Kindle in February!

You can find me on my blog at: www.sarahhawthorne.com