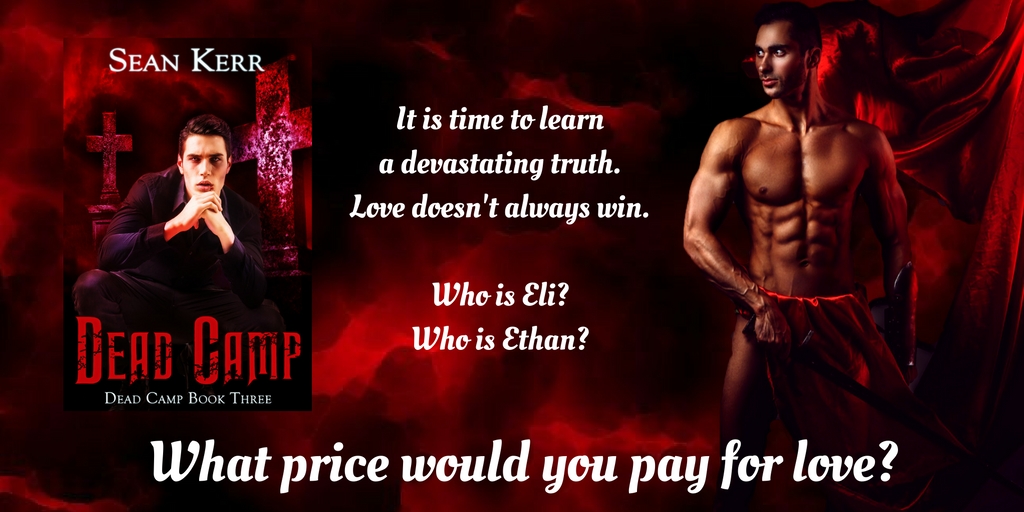 There have been many wonderful things that have happened in my life, since I signed my contract with EXtasy Books, one of which was meeting author Sean Kerr.

I was first introduced to Sean when he was putting together the Over the Rainbow anthology. He’s a kind, and caring man with an awesome sense of humour. I’m extremely grateful for all the help and guidance he’s given me in the past few months.

My name is Sean Kerr and I am a 46 year old gay man living with my husband, Derek, in Cardiff, Wales. We have been together 27 years, and we live with two cats, Harry and Rita, and a host of tropical fish! By day I am an Interior Designer and I have a shop in Cardiff with my amazing business partner Jayne, and we have had the shop now for almost 12 years.

Writing is my first passion. Ever since I read Bram Stokers Dracula when I was 8, I have wanted to write. I have a very active imagination lol, and to be able to sit down and create stories is an absolute joy. My love of Doctor Who, Alien, and so very many films has fueled my love of storytelling, and I have pages and pages of ideas and projects just waiting to come to life. But Dracula set me off on this path, the way the story unfolds through the use of diaries and letters, the way the story is told from the viewpoints of so many wonderful characters, and it is a style that I dearly aspire to. 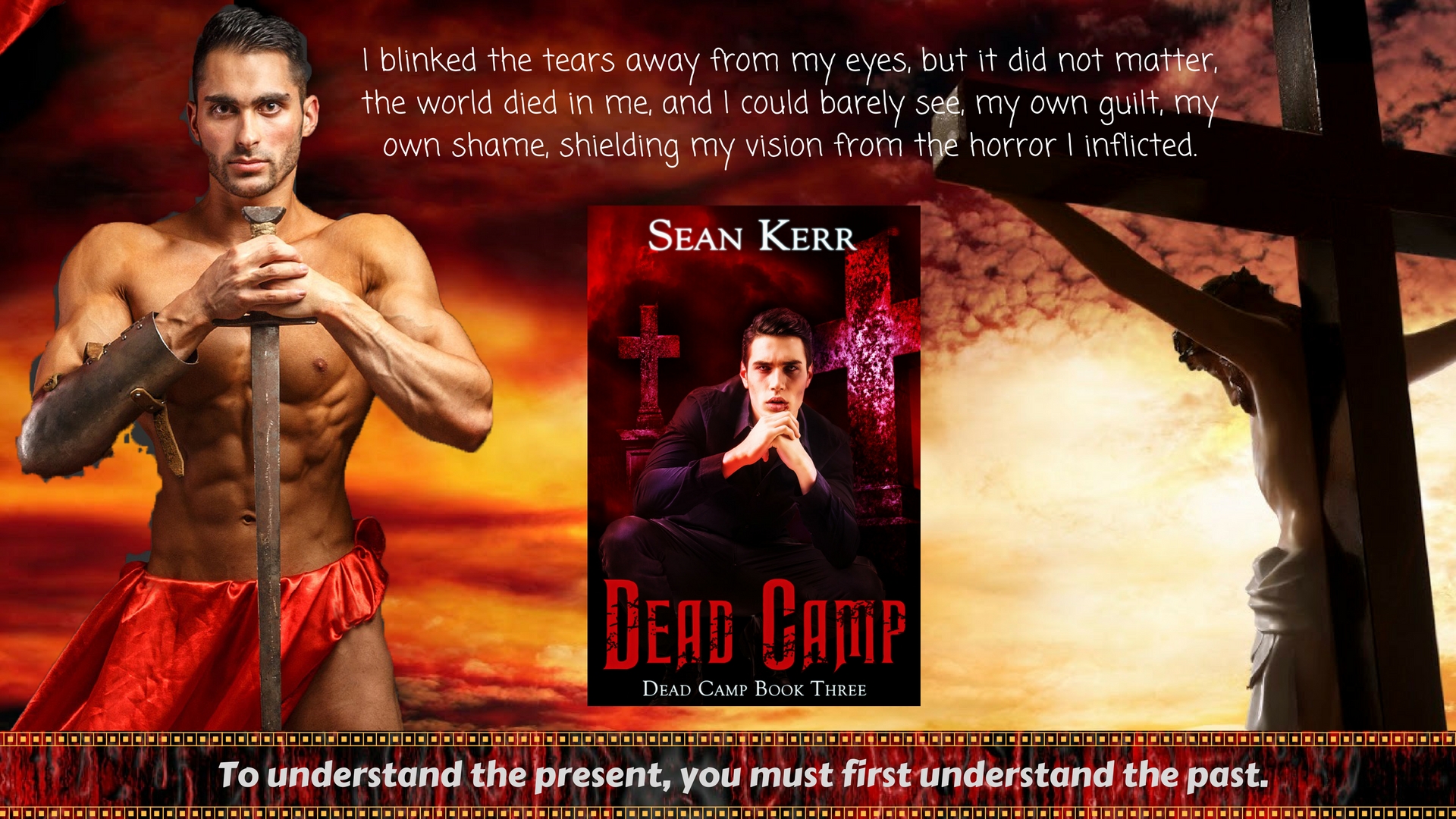 2. Can you tell us a little bit about the Dead Camp series? And what readers can expect when they open one of your books?

I was watching a film with Daniel Craig, a war film, and I found myself wondering what would happen if Vampires were in the mix. I also watch a lot of the discovery channel, and I am fascinated by Hitler and his obsession with the paranormal, and that is how Dead Camp came about. I wanted to tell a Vampire story, my version of it. I wanted to explore why they are Vampires, why there are beautiful ones, ugly ones, ones that can walk by day and ones that cannot. So I set about weaving my own version of the myth using key moments from History, and History forms the basis for the entire series, from the Crucifixion, Victorian London right through to the second World War. It is a complex series of stories that all interweave to tell one big saga, but when all is said and done, it all boils down to a man seeking forgiveness. The books have their funny moments, but they are also very dark, sometimes disturbing, and very emotional, but each character has a purpose and a story to tell, and all of them are connected to tell the whole.

3. How did you choose the genre(s) you write in?

I wanted to write a story for gay men, from the perspective of a gay man. I did not realise that this genre, M/M, existed when I started writing it. Much of the themes within the books mirror my own experiences, and it was important to me that the story be grounded in one man’s goal to find purpose, identity, and forgiveness. I’m a huge horror fan so the horror element is very strong within the books, but it was vital that the books be grounded in reality, albeit one skewed to a fantastical level. I have since found that the vast majority of readers for M/M are women, of all ages, straight, gay, married, single. It is a world that I absolutely love, and I am so glad that I have found it because I love the people within it, so very kind and very generous. But, as a gay man, I wanted to tell a gay story, from a gay man’s perspective, and that is something that I will continue to do with future projects.

Two books. Bram Stokers Dracula as I have already outlined. The way he structured that book is pure joy and something that I really aspire too. Then there is Charlaine Harris and the Sookie Stackhouse books. I loved those books, and she showed me that you could tell a dozen stories through a dozen books and bring them all together to tell one large story, and that inspired me. The way she takes normal life and mixes in the fantastical, and the sexy, really gave me the push to do my own thing. All I can say is thank God that True Blood came to our screens otherwise I may never have found out about that world! So Dracula and Sookie Stackhouse are definitely the parents of Dead Camp.

The emotions are real. The feelings of being rejected, feeling unattractive, the need to be loved, all of that is me. As a 46-year-old gay man, most gay men consider me past it, and that really winds me up. My sex drive is as powerful now as it was when I was in my early twenties. Also, my husband, after so many years of us being together, does not find me as…alluring as maybe I once was, and that fills me with a lot of sadness, and loneliness. So in that respect, all the emotions that run through Eli’s head, are also in my head, and it was quite a cathartic experience to get them down on paper.

Book 1, the diaries of Isaiah Nathan Silberman. That was a pure joy to write. I loved all the research that went into that chapter. Also, the ending of that chapter is a big deal, and all the book up until that point was leading to that one line at the end of that chapter. That was the leaping off point for the rest of the book, and book 2.

In Book 2, the gas chamber scene. I cried my eyes out as I wrote that. I cried my eyes out as I edited it. It is a very poignant, powerful, emotional scene, and I think that it is there, perhaps for the first time, that you really see Eli’s underlying humanity. That scene was instrumental to the books being written, it was one of the very first scenes that I sketched out. It was a killer to write, and the reaction to it has been exactly what I hoped for.

Book 3. I can’t say much about that, except that I knew where it was going to end, and I dreaded the moment. I sat and wrote that last chapter with huge sobs and tears streaming down my face. I am very proud of that chapter, and I can’t wait to see what the reaction to it will be.

Do I pee in the shower? And of course, the answer is yes, who doesn’t? 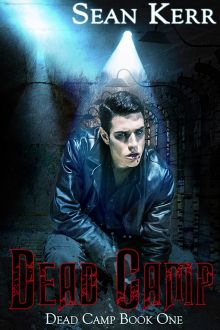 ickening wet sound, his body finally broke free of the earth. A cry of agony burst from between his perfect lips and his head fell back against my shoulder. I felt his long eyelashes brush against my neck as his eyes flickered in defiance of the blackness trying to consume him.

“Stay with me fella, stay with me, we’ll be home in a jiffy.”

Home, back to my castle, what the fuck was I thinking? I was out of my little fucking mind. I didn’t know the man. I owed him nothing. I had an Angel in my dining room and a German soldier in my dungeon and to top things off, I lived with a ghost. Yet I still wanted to take him home? No, I was intent on taking him home, I had decided that the moment I saw him.

But why, why should I get involved, why should I tread that path again, the path that could only lead to pain. It always did. And yet, as I held him in my arms I felt it, something inescapable, something that I could not understand, a stirring, a feeling, like something found when all hope of ever finding it had been forgotten. Something complicated.

A tingle of warning trickled up and down my spine making my hair stand on end. I lowered the hunk to the ground, slowly, carefully and whispered into his perfectly shaped ear.”Remain quiet.”

In a flash of lightning speed, I leapt into a tree, clinging with one hand to a thick branch while my legs wrapped around its thick girth. Someone was out there and not just Mr Fuck Me He’s Perfect online cymbalta. The smell of human, living heart pumping human was unmistakable, that incomparable odour carried on the wind to entice my nostrils and excite my senses, and I was dutifully excited. But there was something else there too, a feint undercurrent, an elusive aftertaste that went beyond sweat and skid-marks, an elusive scent that pricked at my memory, the smell of Demon.

I saw him then, a German soldier winding his way through the field of corpses. His uniform, a grey green feldbluse replete with bottle green collar and shoulder straps, made him almost invisible amongst the branches and the sludge. I could not see his face beneath his field cap but I could easily make out the eagle and swastika emblem embroidered on the bottle green cloth and I noted with disgust the Sturmgewehr semi-automatic rifle hanging loosely from his shoulder.

The Nazi stood barely six metres away from my injured future husband. Do not move lovely man, I said to myself, do not move and don’t make a sound and if you can, be still your beating heart, because to me it sounded like a jackhammer pounding through the forest. He was frightened and in pain. His eyes darted everywhere looking for me, desperate for me, pleading for me to drag him out of that Hell.
I saw the agony flash across his face before the sound escaped his lips. My entire body tensed. Too late, the soldier heard his pain.

He was running then, running towards my Adonis in the pit. Without hesitation, I soared through the air and landed with feline grace before him. The soldier fell backwards with a bloodcurdling scream. The rifle landed at my feet and I picked it up, rising to my full magnificent height, slowly and with purpose, relishing every moment of fear that blossomed across the soldiers white features. I snapped the weapon as easily as though it were a twig and threw the shattered weapon at his feet, watching with satisfied relish as he scrabbled backwards in the mud, his mouth curling away from his face as his terror burst from his throat. 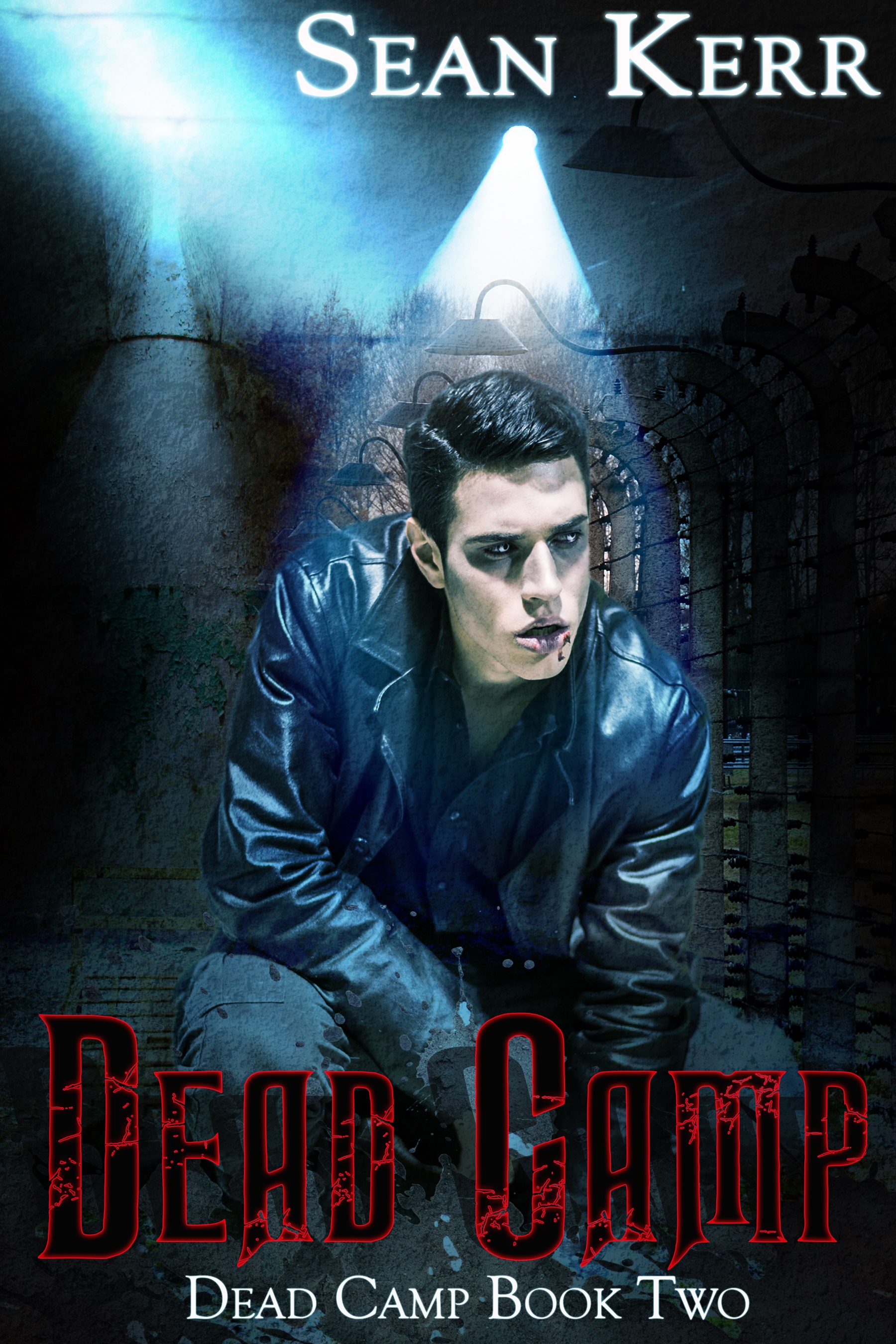 “Demon! You are not from the camp. What are you?”

My teeth extended and my eyes flashed black. My Vampire was out. In one swift movement, barely
visible to the human eye, I leapt at him, pulling him off the floor with effortless ease, lifting his flailing body high above my head. I threw him with all my might at the nearest tree. His spine snapped with an audible bang as his fragile body wrapped itself backwards around the trunk of the trembling pine, his lifeless body sliding to the ground and my stomach rumbled. Dinner was served. 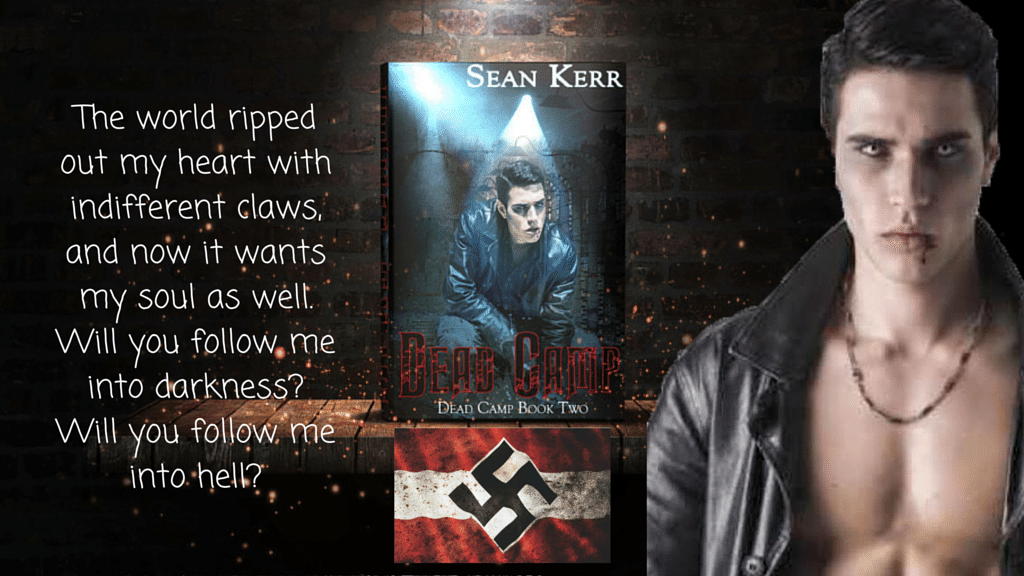 To get your copy of Dead Camp click below: 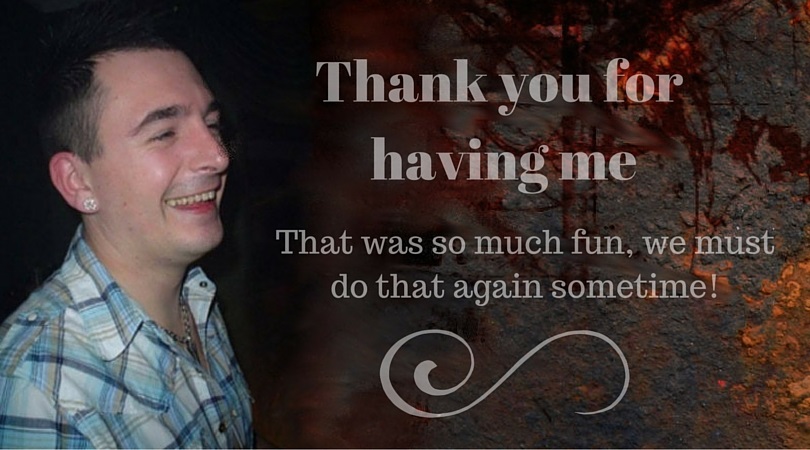