1. Tell us a little bit about yourself, and what made you want to be a romance author.

I’m a librarian and an art historian. Many years ago I had a job as a photo archivist for a university located about 40 miles away from my house, through a very congested traffic corridor. Instead of driving, I took public transportation, which meant I had several hours each day to read. Needless to say, I read a lot, most of it excellent. One book, and I will never say which book it was, was simply terrible. The romantic element was forced, the historical element was erroneous, and by the end I was saying to myself, “I could do this. Better”.

Ha! So many of us say that and then discover it’s not so easy!

But I took up the challenge and participated in National Novel Writing Month that year. I chose Historical as my genre, thinking it would be Historical Fiction with Romantic Elements.

Then, that weird thing happened where all my characters took over and wanted to write their own story. In my case, they all wanted to have sex. With each other. In pairings I had neither expected nor planned. I went for it, letting my characters call the shots.

2. Can you tell us about your new release?

Undamaged is set on San Juan Island in Washington state, very close to the Canadian border. It’s a place very near to my heart. It’s pretty remote, accessible only by ferry or plane.

My firefighter hero, Royce Donovan, is sent there for rehab after a tragedy drives him to drink. My heroine, Samantha Vickers, a National Park Service historian, found her way there because of a traumatic event in her past. 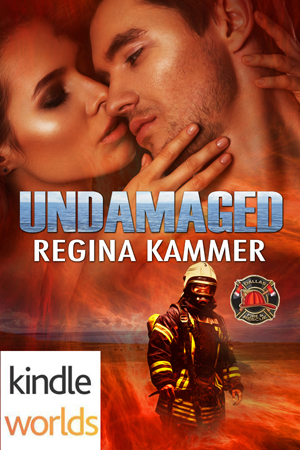 Working wildlands fires is what Royce Donovan was born to do. But he’s been living in Dallas for the last year and fighting urban fires is fraying his nerves. When tragedy strikes, Royce finds solace in alcohol, and ends up in rehab on rural and remote San Juan Island.

Samantha Vickers swears she’s happy. She has the perfect job as Historian at San Juan Island’s National Park. Leaving the excitement and stress of the big city for the bucolic life of an island was a huge change—and a risk she had to take for peace of mind.

A firefighter coping with tragedy. A historian escaping traumatic shock. An island brings together two damaged souls seeking respite and recovery. Will they discover love as well?

3. How did you choose the genre you write in? You write historicals, how did you decide which time period you wanted to write in?

As I explained in my bio (above), erotica chose me, I didn’t choose it!

On my very long commute (see question 1), I read all of Jane Austen’s works. A lot of romance authors will point to Austen as an influence. Her sharp wit, profusion of characters, and richness of characterization are elements I want to emulate.

I recently discussed this very question on a writing forum! Most of my contemporary stories are based on some aspect of my real life, whether it’s jobs I’ve had, or places I’ve lived, or vacations I’ve taken, or incidents I’ve experienced. For example, much of my September 11th story, “Silent Sky” (appearing in the anthology Naughty Reunions), is based on my real life including how I experienced 9/11 in Oakland, California. I think including such elements in a story adds a sense of authenticity.

My favorite short story of mine is “On the Eighteenth of January, ’78; or, A Night At Valley Forge” appearing in the Naughty Literati anthology, Naughty List: Thirteen Naughty Holiday Stories. It’s simply a perfect short story. It’s super kinky, literary, and poignant. To this day I cannot recall how I came up with it.

As far as my characters, I’m in love with all of my heroes, and I will say Captain Samuel Taylor from The General’s Wife is my quintessential hero. Secretly, though, I have a huge crush on Dr. Julius Christopher from The Pleasure Device. Julius is so evil and yet so conflicted. And he’s sexy as hell.

Probably “Is anything in your book(s) based on real life experiences or purely all imagination?”
Because no one ever asks the murder mystery writers that question. They only ask the sex writers that question. You’ll note I did not answer the question (#5) in terms of sex, though. But I suspect interviewers want the sex answer. To quote the awesome Beverly Jenkins, “When folks ask if you’ve done all the naughty things you write about in your books, tell them, ’HELL YEAH!’”. So, hell yeah, I have done all the naughty things in my books! 😉 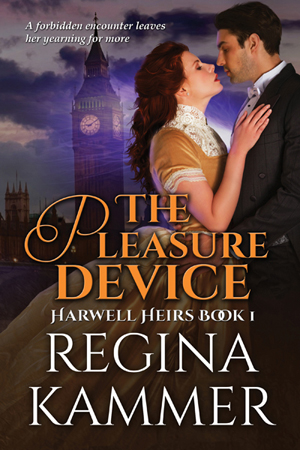 Excerpt from THE PLEASURE DEVICE

As she strode toward the wingback Helena thought the empty bedroom was oddly humid, the windows peculiarly cast in a dissipating haze of steam. Then she felt a presence. A man’s presence. She stopped short.

“Hello?” she called out meekly.

It was him. Her heart leapt to her throat.

She watched as he ran to the door and locked it.

“Whatever are you doing?”

“Locking the door.” He grabbed her hands. “Helena, you should not be in here.”

“Because you’re in here?” she asked plainly.

“Well, yes.” He raked his hand through his hair nervously. “And what are you doing on the third floor anyway?” he scolded.

“I went to the ladies retiring room on the first floor and then I decided to explore,” she began defensively. “There were so many people going up and down the stairs I thought there was nothing wrong with it. I was just looking for a little respite before I was expected back at the ballroom.”

He shook his head. “I apologize. Of course your reasons are un-censurable. But darling, I don’t want anyone to find you in such a compromising position.” He exhaled, his expression twisted, trying to think what to say. “You see, the third floor is where guests go to have illicit love affairs.”

“Oh.” She should have been completely scandalized by such a notion, but she was far more enthralled that such things happened at formal occasions.

Nicholas led her to a window as if to consider how he could manage her escape, but seemed to realize how foolish that was.

In the pale moonlight, she gazed from his worried expression down to his untucked shirt bunching where his braces met his trousers. His half-dressed appearance suggested a recent adventure of sorts. “Then did you just have one?”

“One what?” he asked distractedly, reconsidering the window.

“An illicit love affair.” She relished saying the words aloud. She could never talk like that in front of anyone but Nicholas.

He glanced down at his state of dishabille, then regarded her apologetically. “Helena, please believe me,” he implored. “I came here as innocently as you did, to find some peace away from the crowds.” He looked away, abashed. “But I found someone here, someone I knew, someone I liked.” He brought her hands to his lips and kissed them as he gazed at her. “It was base and contemptible. I hope I have not lost esteem in your eyes.”

“Was it wonderful?” she asked eagerly.

Nicholas was taken aback by her response. “I—I suppose it was, rather.”

“Oh, how romantic!” She wandered over to the wingback and flopped down into it, his gloves falling from the arm to her lap. “I wish I could do something so wicked,” she lamented, smoothing and straightening the kid leather. It simply was not fair that others could be so free.

He knelt at her side. “Helena, you should never have to do such a horrid thing! Your husband…” He faltered. “Trust me, your husband will worship you. You will find all the love and romance you’ll ever need with him.”

Your husband… Helena didn’t even know who he was going to be. Tears welled in her eyes. How could she possibly love a man she did not even know? Meeting Nicholas in third floor bedrooms sounded like a much preferable life. The tears were insistent. She wiped her cheeks, staining her gloves.

Nicholas jumped up. “Darling, what is wrong?” He pulled her out of the chair and led her to the bed. “Sit with me. Talk to me. Tell me what is bothering you.”

She sniffled as she sat on the mattress. “Do you have a handkerchief?”

“No,” he responded brusquely. He slipped off his braces and offered the hem of his shirt. “Please, use this,” he said gently.

She wiped her eyes and her nose, pulling the shirt up as she did so, revealing his torso little by little until she had completely forgotten about her tears and was simply staring at his stomach. She had never seen a man unclothed before and the sight was affecting her in an unexpectedly physical way. “May I touch you?” she asked quietly, unable to quell the awe in her voice.

“Yes,” he said with a yearning quiver.

Buy your copy of Undamaged here.

For your copy of The Pleasure Device, purchasing options are here.

To connect with Regina:

Keep up with Regina at: Kammerotica.com

Connect with her on Goodreads