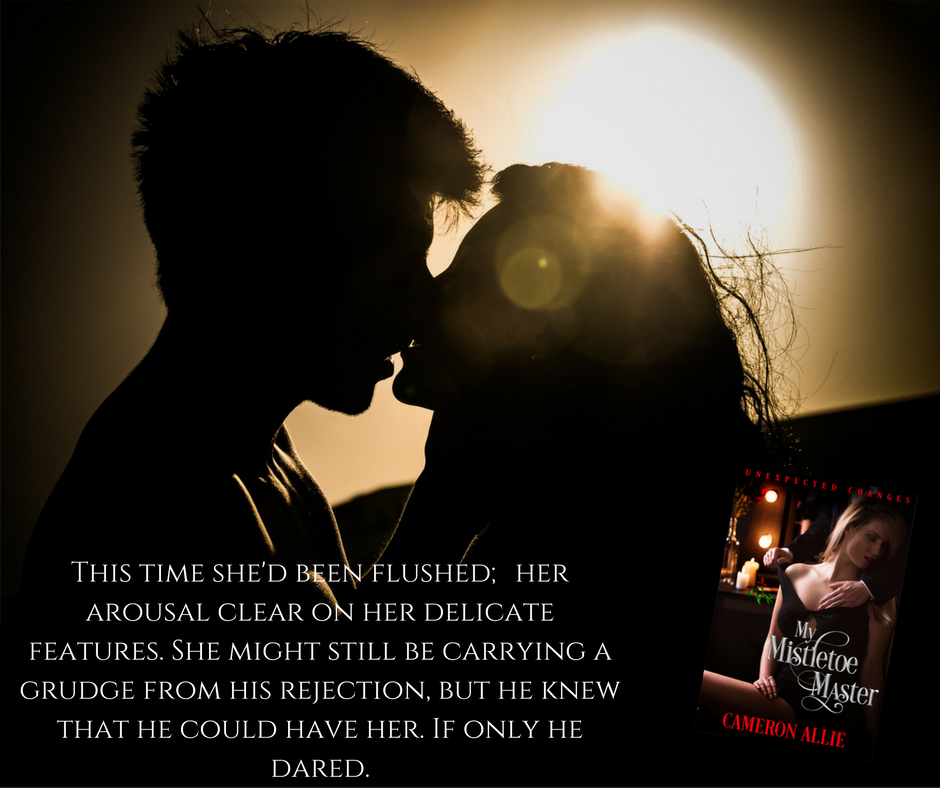 On October 31 I posted what I called a “sandbox scene”. It was just a fun little post that explored a moment from my characters’ past. It was a scene from when they were in high school. It was never meant to be part of the story, but just a little peek into their lives. Scenes like that also give me a chance to get to know my characters better. It also gives readers a little bit of bonus reading. Follow the link to read that sandbox scene: What’s this sandbox thing?

I have a few more “sandbox” scenes planned for the Unexpected Changes series, but for today I wanted to share with you an exclusive bonus scene for My Mistletoe Master.

The mistletoe scene that I wrote could easily be the prologue for My Mistletoe Master, but as writers are often told to skip the prologue, I didn’t include it in the story. However, I felt it was worth sharing, and decided to offer it to readers as a free bonus scene.

The book will be out next Friday available through Extasy, and will be available the following Friday on third party sites such as Amazon. To read the excerpt, blurb, and the entire mistletoe scene click on the link that follows this snip it, or find it under books in the menu.

“What the fuck was that?”

Her features full of fear, she shrugged. “Mistletoe.”

“Don’t give me that bullshit. You just stuck your tongue down my throat for all to see.” It was a lie. He’d participated as thoroughly as she had.

Angry they stared each other down.

This was the girl that had worshiped him since they were kids. As children they’d sometimes played together, but as they had gotten older he’d taken to pushing her away. No matter how hard he tried he’d never be good enough for her. It would be better for her to find someone else, to stop chasing after him.

It had been difficult to ignore her awkward flirting when she was a teenager, but to turn her away now was painful useful site. She’d become a beautiful, brunette bombshell, and deep down part of him wanted to claim her for his own.

He had to get them ba

ck on track. “Your brother is going to murder me.”

She huffed. “That’s what you’re thinking about right now?”

To read the entire scene click on the link: My Mistletoe Master